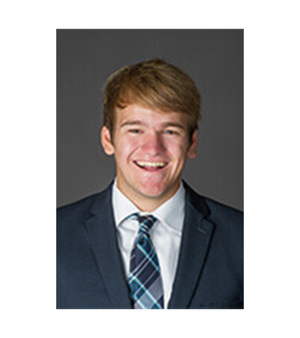 Keenan Bross - photo courtesy of the Congregation of Holy Cross

To many, Keenan Bross’s undergraduate experience would seem unconventional, but he would not have it any other way. Bross is currently living in Old College, an undergraduate seminary for the Congregation of Holy Cross.

Residing in Old College allows Bross and 10 other seminarians to attend classes at the University of Notre Dame or Holy Cross College while discerning whether they are called to the religious life as a priest.

The Old College program’s ultimate goal is preparation and discernment with the Congregation of Holy Cross until the end of senior year. “For most guys, however, they actually move over to Moreau Seminary for their senior year at Notre Dame or Holy Cross College, after which they go to the novitiate (a year of intense prayer and discernment without classes in Colorado Springs), and then begin the Masters of Divinity Program at Notre Dame,” Bross says.

“I was really struck with the idea of perhaps becoming a priest. For the next few years, I explored that. I had a ‘science-y’ mind; I had always thought I was going to be a scientist, or physicist going to figure out things,” Bross says.For Bross, a Notre Dame freshman originally from St. Louis, the discerning process began in his sophomore year of high school, something which took him by surprise.

Bross pursues both of these callings while he attends Notre Dame and lives in Old College. He has chosen to major in physics at Notre Dame, but he will also take 30 total credit hours of philosophy and 12 credit hours of theology as a part of the seminarian curriculum.

“Old College is distinct in that not only is it a living place and a community, it is a commitment to a specific way of life. Like most dorms, we eat together, study together and pray together — but in a more explicit way,” he says.

In general, the discernment process focuses on the five pillars of spiritual, human, pastoral, intellectual and community formation. “Although these things seem quite abstract, they contribute to a very intentional lifestyle.” He says, “This means making sure to pray, learn, serve, and hang out for a wholesome goal and having people helping us do so.”

The seminarians’ daily schedules reflect these pillars; they begin the day with prayer from 7 to 8 a.m., and then experience “intellectual and community formation” at class and with friends. They join together on Sunday and Tuesday nights for community dinner or formation conferences. On Thursday nights the discerning students meet with the graduate seminarians in the Moreau community. There are certain social aspects of his undergraduate experience that are different than other students, however.

“There are no dorm dances. A pretty distinct part of Old College is that we are not to engage in romantic relationships while in the program, and while we are permitted to go to dances at any other dorm, we do not organize one of our own.” During football games, the seminarians sit together instead of in the student section.

He says, “Another pretty abnormal aspect of life in Old College is that there are only 11 of us, and unlike most dorm-life, we live with just a small number of guys, a lovely experience.”

Like many other dorms on campus, Old College also organizes weekly masses that serve food afterwards. “Log Chapel Mass” happens every Tuesday with mass at 9 p.m. and a soiree after the service. Bross’ favorite part of his seminarian experience involves the community he has found at Old College.

“It’s surprised me how rich and fulfilling life has been [in the seminary],” he says. “Being with a group of people who are in love with Christ and trying to become greater at that is profound. I certainly expected that, and I certainly expected to grow, but I didn’t know what it would look like.”

For those discerning the call to enter the priesthood, Bross’ advice includes two key parts: embracing individuality and prayer.

“Don’t completely change your life and throw away who you are to somehow find God,” he says. “The best thing in that stage is to really live fully who you are. Embrace everything about yourself and really try to encounter, ‘Who am I?’ At the same time, be very intense with prayer and asking, ‘What am I called to? What do you want me to be? Who do you want me to serve?’”