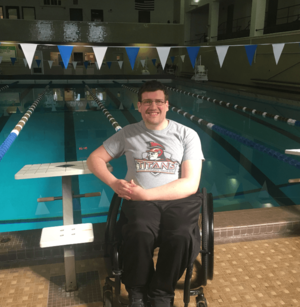 In early 1990, Carol Provost received difficult news followed by referral to a geneticist and advice to terminate her four-and-a-half month pregnancy. Her unborn child, she was told, had spina bifida — a neurological condition that disrupts development of the spinal cord and parts of the brain. In this case, spina bifida meant her child would likely be in a wheelchair his entire life.

Undeterred, Carol and her husband David insisted on having the baby, and on August 1, 1990, Gavin Provost was born.

All smiles, Gavin approaches my table in Notre Dame’s 24-hour fast food café. Today I’m meeting him for the first time, but the first time I actually saw him was during a Notre Dame hockey game two days before, when his sled hockey team — the River City Rovers — played an inner-squad scrimmage between the first and second periods. It was hockey as many in the arena had never seen before, but the announcer had hardly named the entire lineup before the buzzer signaled the end of their ice time.

We shake hands when he rolls up to the table, and soon enough I’m blurting out my great disappointment and slight outrage that the scrimmage had lasted a mere two minutes. “I feel like they should’ve let you guys play for much longer — I wanted to keep watching!”

He laughs in agreement. “Yeah, I was like, ‘Wow, that was not that long!’ But we got the message out there. At least people know it now.” And there it was, right away, the one thing it doesn’t take anyone long to notice about this guy: He never dwells on the negative.

The youngest of four, Gavin sums up his childhood as “very normal — as normal as it could be.”

“My family treated me like everybody else despite the wheelchair. [My siblings] were still like, ‘He’s my little brother! I’m gonna make fun of him, mess with him, all that stuff.’”

He even had the very typical boyhood aspiration of growing up to be a professional baseball player. “But then I was like, ‘Oh, I don’t think that’s going to work because of the wheelchair.’” The challenges he faced growing up were primarily on account of this same realization: of wanting to do what every other kid his age was doing only to find that, for example, the playground had a wheelchair-disagreeable wood chip terrain. Early on, he learned to adapt and turn this attention toward what he was able to do — a redirection that led him straight to the neighborhood swimming pool.

“I have always felt free in water,” he shares. “I never wanted to swim with water wings or any kind of floaty — I wanted to swim on my own.” Not everyone saw his ambition and his ability, though. “My parents tried to get me onto a swim team early on, but every coach that they talked to saw me as a liability.”

They continued their search, and finally, at age 10, Gavin found a place on the Arlington Gators swim team, coached by Lynn Kachmarik. He immediately took to freestyle and backstroke — but it was freestyle and backstroke as many of the swimming pool spectators had never seen before. Due to his parents’ ongoing encouragement, Gavin hadn’t given much thought to how his unconventional technique would be received.

“I was like, ‘So I’ll just do this’ and would only use my upper body. I didn’t think it was strange,” he says, laughing as he remembers the first time he competed. “And then people went crazy when I swam! And I was like ‘Oh. Okay!’”

His swimming career continued into the next summer when he joined the Knollwood Country Club team coached by Jim Niedbalski, and then through all four of his years at St. Joseph’s High School with coach Tony Knowls. Alongside his beloved St. Joe’s teammates, who treated him “just like one of the guys,” Gavin attended two-hour practices Monday through Friday, then a three-hour practice and an hour of weights on Saturday. Knowls provided personalized workout routines that would push Gavin to his limits.

Gavin’s experience on the team was certainly not one without challenge, though. His junior year, Gavin grew frustrated that all of the hard work he was putting in wasn’t translating into victories at meets, and this frustration that drove him to quit the team for several weeks.

“There were times when I just wanted to be done with swimming forever. I remember that we lost this one big meet by a couple points. Like, if we had just done a bit better in one race, we could’ve won. And I took that very hard. I remember thinking, ‘What if Coach replaced me with a more capable person?'"

During this period of uncertainty, Gavin was met with the support of his coach, teammates and family, who all hated to see him give up the sport he loved.

“My coach was like, ‘Don’t just look at the results of the race. Look at yourself. If your personal times are improving, that’s what matters.’ And my teammates were really great. They knew I struggled but they didn’t care. They were like, ‘No, you’re part of the team. You’re gonna do this. You’re gonna finish this.’”

Gavin re-joined the team after a few weeks, with a mindset focused less on wins and losses and more on the empowerment that comes with hard work and self-improvement.

“Swimming taught me I am capable of so much more than I thought. I still remember swimming my last lap of my high school career and the elation that I felt after I touched the wall for the final time … I went underwater and screamed out of happiness and pride. I’ll never forget that feeling.”

In 2009, Gavin received a call from Chicago Bears owner Patrick McCaskey announcing that his winning perseverance had not gone unnoticed. Gavin Provost, for his courage and commitment, had been awarded the Spirit of Saint Paul Award — an award that led to his becoming the first high school athlete to be inducted into the Sports Faith International Hall of Fame. Previously, the Hall consisted solely of professional athletes.

Today, Gavin is a senior at Indiana University of South Bend, where he is studying general studies, psychology and history. He says he might add education into the mix, as well. He’s the manager of the IUSB women’s basketball team and a member of River City Rollers wheelchair basketball team and River City Rovers sled hockey team. He’s a huge Notre Dame football fan: “That hurt this year.”

As our interview comes to a close, Gavin shares his favorite recipe — Buffalo salmon — and together we wonder if, put in dip form, it could surpass its chicken counterpart on the ranking of Notre Dame football game tailgate foods. He tells me he’s big on listening to oldies music like Earth, Wind & Fire and Michael Jackson, “plus, some Motown.” His favorite place in the world? “Any place with friends and family. Anywhere my family is, I’m fine with it.”

“What are you most passionate about?” I ask.

“Sports,” he responds instantly, unsurprisingly, and we both laugh before he continues, “And basically showing that people with disabilities can do anything they want — it’s just about getting out of your own head to do it. I mean, so many times people are like, ‘Oh, I can’t do that because xyz'… but people are capable of so much more than they think.”

We make our way out of Reckers, and Gavin tells me that while waiting for his ride, he plans on rolling around the campus for a bit to see if his phone can locate any Charzards or Squirtles to add to his PokemonGo collection. Before we part, he gives me his YouTube channel username, OptimusProvost.

“It's funny. I have something called a ‘standing wheelchair’ where I can actually stand up,” he explains. “My friends said I looked like a Transformer in it and gave me the nickname Optimus Provost.”

That’s the image I’ll leave you with: Gavin, the young man repeatedly counted out by people since before he was even born, rising, with the might of a Transformer, into the standing position they thought would never be possible — and grinning all the while.