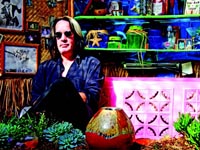 With a career spanning nearly five decades, Todd Rundgren has done just about everything: created the perfect pop ballads, produced records for other legendary musicians, developed pioneering technology for the music industry and crafted albums — like his 1972 Something/Anything? and 1973 A Wizard, A True Star — that are hailed as among the most influential and progressive of his time. His career is vast, eclectic and wildly successful. Now, in conjunction with his most devoted fans, Rundgren is promoting the moral imperative of music education through his Spirit of Harmony Foundation (an organization for which I am student liason on campus).

Rundgren became a household name with 1972 hit singles “Hello It’s Me” and “I Saw the Light.” He is also known for his 1983 hit, “Bang on the Drum All Day.” His success in both composition and production of music, however, stems from his childhood.

“I was lucky enough to grow up in an era when people still considered music education to be an important and positive option for kids, socially and culturally,” Rundgren says.

The multi-instrumentalist’s knack for music melded well with his fervent interest in technology. The son of an engineer, Rundgren was exposed to new technological developments from a young age. He began expressing interest in computers in elementary school; later, with the introduction of personal computers, he took a year off to learn to program and engage with other industry professionals.

After finding commercial success with chart-topping hits, Rundgren began to produce music in an unconventional manner. He created a studio of his own in which he experimented with synthesizers and electronics.

“I wanted to use the studio as a tool more than something to simply capture sound,” Rundgren recalls. “It was something to manipulate and often create sound.”

He has always been one to stay on top of, and often ahead of trends in the evolution of music. That still holds true; Rundgren has been particularly intrigued by and involved with electronica in today’s culture. He released an album, Runddans, in collaboration with Norwegian producers Lindstrom and Emil Nikolaisen in 2015, and featured DJs in a recent live tour. Tame Impala, who credit A Wizard, A True Star as one of their favorite albums, commissioned Rundgren to remix their hit song “Elephant.”

“[Electronica] reminds me a lot of the things I used to do in the 70s,” he says. “These artists throw off the standard rules of record making.”

After finishing his own tour and a tour with Ringo Starr’s All-Starr Band, Rundgren will record a new album and join Notre Dame this September as Artist-in-Residence. He’ll be teaching a one-credit course, performing in concert with student musicians, playing at the Duke game pep rally, and initiating new youth music programs in the South Bend community through his Spirit of Harmony Foundation.

The foundation’s underlying theme on campus is “Play like a Champion Today,” expanding on the iconic athletics slogan and broadening it to convey the essentiality of music education. This organization, whose representatives will be joining Rundgren on campus, sprang up as the result of a continued effort by Rundgren’s close friends and devoted fans to help those in need.

Research from Northwestern University shows that regular, intensive, instrument-based music education results in permanent improvement in brain function — a physiological change that negates the “signature of poverty” and aids language acquisition. This information spurred the foundation of Spirit of Harmony.

“Everybody knows the obvious advantages [of music education]: It aids in socialization, keeps kids out of trouble, that sort of thing. But the idea of something empirical — that music has an actual, real, measurable effect on the way kids’ brains develop — that made this an imperative,” Rundgren says.

However, the foundation aims to make a more meaningful impact than simple monetary donations. “It’s specifically not our goal to raise millions of dollars and just start blindly passing it out,” Rundgren explains. Rather, they aim to meet the specific needs of an organization by “leverag[ing] Rundgren’s philanthropic interests, professorial activities, worldview, vision, talent, celebrity, experience, fan-base and professional resources to direct financial and real-world resources to nurture music-based education programs and the individual performer,” long-time fan and Executive Director Jean Lachowicz says.

Rundgren’s friend and Chairman of the Board Ed Vigdor notes that “for an art form about making beautiful sound, music education does not make nearly enough noise.