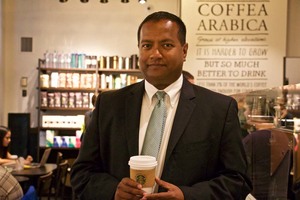 Forget South Bend — for Chris Abayasinghe, Notre Dame is located at the intersection of faith, food and hospitality.

As the director of Campus Dining, he proves his passion for students and culinary excellence every day. “When I think about Notre Dame, I am reminded of our charism, which is hospitality,” Abayasinghe says. “But that would come many years later in my life.”

“My life has had a very circuitous path getting to Notre Dame,” says Abayasinghe.

As the son of a diplomat, Abayasinghe moved from region to region abroad, living in Teheran, Indonesia and the Philippines with subsequent trips through Africa. “The part that always connected us to the fact that this year we could live in this country, the next year — who knows? It was the commonality around food. It was just the simple things like that.”

After completing high school in Daytona Beach, Florida, Abayasinghe left the U.S. to “work for a couple NGOs [non-governmental organizations]. Go off, save the world — do that sort of thing.” But after a several years, this path in life did not feel right. “I found myself in southeast Asia, realizing one person couldn’t do it all, and also realizing, maybe it is time I went to college,” says Abayasinghe.

It was at Eastern Connecticut State University that Abayasinghe reconnected with food. Jobs for international students were limited to oncampus, he says, “I got a job in the dish room, and after the first semester, my manager thought I did such a good job that I got a promotion — to wash pots.”

But these humble surroundings reminded Abayasinghe of the fundamental human connection present in food. “It is really about the people at the end of the day,” Abayasinghe says. Even after he was promoted to student manager, Abayasinghe remained committed to people. “You get to work with people from all walks of life, and everyone has a story,” he says. “Every single person has a story.”

He graduated with an economics degree, then started working for a multinational consulting firm. “What anyone who gets an econ degree does,” he says. This firm happened to be Sodexo, which at the time went into struggling dining services and outsourced assistance.

And then, he says, “Life has a funny way of happening.” It was then that Abayasinghe met his future wife, who is also from Sri Lanka. This one encounter changed his trajectory completely.

Abayasinghe changed jobs in order to have a more permanent home base and focus on building his family. Along with his wife, he moved to a university in western Massachusetts called Williams College, a small liberal arts college surrounded by community farms. Abayasinghe lived there for six years, working for support services for students (mail, dining, etc) while completing his graduate work in Boston on the weekends.

Once again, Abayasinghe found himself at the intersection of food and people. He instituted a “true dining program” for that college: an efficient dining program that would “provide a net return back to the university to support student scholarships,” among other things.

Even now in his office on the second floor of South Dining Hall, Abayasinghe has a corner dedicated to his proudest moments, all of which feature successful interactions with students. The walls are lined with awards given by the student body. “I loved the engagement with my students,” Abayasinghe says. “This all happens because of the great people you have working with you. You don’t do this by yourself.”

One night, five years after arriving at Williams College, Abayasinghe — a self-professed nerd — started crunching numbers for the top universities in the United States “for fun.” He started with the top twenty business schools in the nation, then looked for the highest graduation rates, then crossed that with the highest income levels, he says, in order to satisfy his personal interest in “what these kids are studying.”

And then, “Notre Dame popped up,” Abayasinghe says. “When I was looking at Mendoza, there was a little tab in the corner that said ‘Jobs,’ so I clicked on that. The first job that popped up was ‘Director of Food Services.’” When he told his current boss he might apply, his boss replied “You know, I’m a Catholic too. And you’d be an absolute idiot if you didn’t apply.”

Finally, the separate guiding forces in Abayasinghe’s life: faith, food, and student services, intersected in Notre Dame’s charism of hospitality. So, Abayasinghe applied for the position. He received a phone call a short while later, asking “‘Have you heard of the Fighting Irish?”