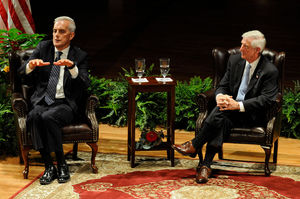 On Wednesday, Oct. 4, the 2017 Notre Dame Forum officially kicked off.

Appleby presented the introduction for the Forum, providing a brief history on Notre Dame’s mission to deepen its international position in the world since 2010. Acknowledging that Notre Dame is attempting to cement a transnational place in a globalizing world (notably proven by the opening of Appleby’s Keough School), he stated that the intent of the Forum is to encourage sustained reflection on how faculty, staff and students of the university can incorporate a grounded moral awareness that is the centerpiece of a Notre Dame education and manifest that in service, research and the like.

The kickoff event itself was respecting the role of the chief of staff, one which many have called the second most powerful job in the U.S. government. The two men agreed that much of their responsibilities as chiefs of staff lay with making sure the president had all of the information he needed to in order to make a sound decision — and not burdening him with decisions that he did not have to make.

“The greatest challenge for chief of staff is the care and feeding of the president,” Card said, going on to say that the greatest task of the role is “to make sure the president is available to make a brutally tough decision at any time during any day.”

McDonough agreed, stressing the importance of hiring and managing an effective staff and White House in order to stay one step ahead of the president and certify that “these extraordinarily difficult decisions … come to him in a fashion that ensures he’s got all of the information that he can have to make sound decisions.”

Following their discussion with Policelli, the two former chiefs of staff then participated in a Q&A with graduate and undergraduate students, ranging on topics from the current White House administration’s policies to American policies on Israel and Palestinian relations.

The Notre Dame Forum plans to continue to hold events on Notre Dame and the world through the duration of the school year, including events at the university’s “Global Gateways” and the fifth annual Global Service-Learning Summit, to be held in April 2018.