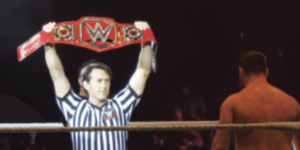 In October, Notre Dame made headlines by announcing that it would host the first U.S. presidential debate in the 2020 election series. Yesterday, the saga continued when the university made the controversial and unexpected announcement that it would eschew the traditional Lincoln- Douglas debate format in favor of a “more progressive, modern and engaging approach” to our nation’s time-honored tradition: namely, by replacing the debate with a WWE-style wrestling match.

University officials say that this decision came after weeks of intense deliberation. At a press conference this morning, university president Fr. JayJay Jaykins, C.S.C., defended the decision while simultaneously emphasizing the importance of civil discourse.

“The heart of democracy is addressing significant questions in open, reasoned discussion that will inform voters as they prepare to cast their votes,” Jaykins said. “However, we must recognize that as times change so too must the way we engage in civil discourse. I don’t know about you all, but I wanna see some freakin’ pile drivers!”

Proudly brandishing an action figure resembling South Bend mayor and democratic hopeful Pete Bootijudge dressed in an elaborate wrestling costume, Jaykins seemed almost giddy as he continued: “What’s more American? Two people sitting on a stage, peacefully talking out their issues, or brutally smashing a chair over the head of anyone who disagrees with you? It’s an easy choice.”

The interview abruptly ended when a member of the press asked a question regarding the scripted and often over-the- top nature of WWE wrestling. At this point Jaykins became noticeably irate and started vehemently defending the authenticity of “his favorite sport.”

Jaykins was reportedly last seen wandering campus in a daze, struggling to come to terms with the fact that the drama, intrigue and storylines cherished by WWE fans throughout the country are in fact fictitious. WWE chairman and CEO Vince McMahon declined Scholastic’s request for comment.