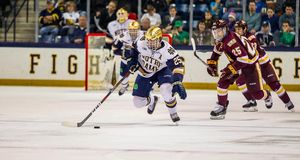 After back-to-back Frozen Four appearances, the Notre Dame hockey program has gone from the hunter to the hunted. Despite a significant roster turnover that saw seven seniors graduate, Notre Dame began the season ranked No. 1 due to the return of many key players and the addition of some skilled freshmen. One can imagine the message in the locker room is quite clear: Bring home that elusive trophy that has escaped Notre Dame’s grasp the past two seasons.

The 2017-18 Notre Dame team was gutsy and always seemed to find a way to win. Championships never come easily, but the Fighting Irish were able to capture two last season and came so close to a third. The conference slate was packed with top-20 opponents, but Notre Dame started 15-0 in Big Ten matchups.

Although the rest of the regular season was a bit choppier with six losses down the stretch to Big Ten opponents, the team rebounded to win the conference regular season and tournament championships in thrilling fashion. The Fighting Irish not only won last season, but also had a flair for the dramatic on numerous occasions — including an overtime win in the Big Ten Championship game against Ohio State and an overtime win against Michigan Tech in the opening round of the NCAA Tournament.

Despite these wins and the two championships, the season ended with a heartbreaking loss to Minnesota Duluth in the national championship game. But last year’s wins don’t matter much anymore; it’s a new season with a new team searching for a new identity. Without former captain and leading scorer Jake Evans, this year’s team will have their work cut out for them.

Through the first 10 games of the 2018-19 season, the Fighting Irish have already played seven games against top-15 opponents including two against reigning national champion Minnesota Duluth. Through these first 10 games, Notre Dame has a record of 5-4-1. This might not appear very impressive, but the pieces are beginning to come together and there are some impressive wins sprinkled in.

In an offensive explosion to begin the season, the Fighting Irish scored 21 goals in four games en route to a 3-0-1 record, including a big 3-0 win against then-No. 4 Providence Friars. This stretch also featured a 6-6 tie against Mercyhurst and two blowout wins over Nebraska-Omaha. This offensive explosion eased concerns that Notre Dame had lost too much offensive firepower since last season.

The schedule got tougher from there with the next four coming against No. 2 Minnesota Duluth and No. 7 Ohio State. The offense was a major concern in two losses to Duluth as Notre Dame only mustered three goals in two games. Despite this, the Fighting Irish gained a 2-1 lead in the first game before allowing a shorthanded goal to Duluth. After this, the Bulldogs had all the momentum and scored late in the game to take a 3-2 lead.

The offense continued to struggle in the first game against Ohio State, failing to score a goal despite a great game from the defense and junior goalkeeper Cale Morris in a 1-0 loss for the Irish. In a crucial game to break the home losing skid, Notre Dame allowed the first goal of the game before scoring goals in the second and third periods to get a much needed 2-1 win against the Buckeyes. The Irish then split a weekened series at No. 14 Michigan.

Through the first 10 games, the Fighting Irish have shown a great deal of potential in their quest for a third straight Frozen Four. They are led in scoring by senior defenseman Bobby Nardella and junior forward Cal Burke, as well as junior goalkeeper Cale Morris holding his own in net. If the offense rebounds and the defense continues to play well, Notre Dame will have a good chance to gain some wins against the Big Ten and compete for a national title.