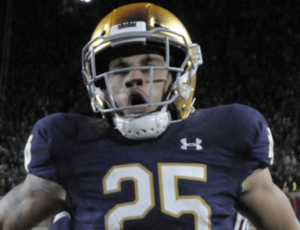 Notre Dame vs. USC. The ears of any college football fan perk up at the sound of this phrase. It’s one of the greatest rivalries in college football. Traditionally, the game takes place on the second or third week of October at Notre Dame stadium or on the Saturday following Thanksgiving at the Los Angeles Memorial Coliseum. The two teams met for the 90th time this year, and currently, Notre Dame is leading the series 47-36-5.

While the origin of the rivalry is not known for sure, one possible explanation comes from a conversation in 1926 between Knute Rockne's wife, Bonnie, and the USC athletic director Gwynn Wilson’s wife, Marion. At the time, USC was searching for a national rival. They had sent Wilson and his wife to Lincoln, Nebraska around Thanksgiving, when Notre Dame was scheduled to play against Nebraska. While the Wilsons were unable to persuade Rockne to form a rivalry series against USC (Rockne was concerned about the long travel required for such series to take place), Marion eventually convinced Bonnie that a biennial trip to sunny southern California would be more pleasant than dealing with the cold, snowy weather in Nebraska during Thanksgiving. Bonnie discussed the benefits of the trip with her husband, and on Dec. 4, 1926, the rivalry between Notre Dame and USC became official.

Another possible origin comes from Rockne’s relationship with Iowa’s football coach Howard Jones. After Notre Dame’s championship season in 1924, Rockne was offered the opportunity to take over USC’s football program. Although Rockne turned down the offer, he did not hesitate to spread the news about such an opportunity to the Notre Dame administration in order to earn a raise and strengthen his reputation. Rockne then recommended Howard Jones to the USC football program, which proved beneficial for USC. After all, the Trojans needed someone to replace the previous coach, “Gloomy Gus” Stevenson.

Notre Dame and USC had their first football game in 1926, where the Irish beat the Trojans 13-12. For Rockne, it was “the greatest game that he ever saw.” The next year they faced each other at Chicago’s Soldier Field, where the Irish won 7-6. Roughly 120,000 people came to watch them play, the largest audience in NCAA history. Since then, the two teams have faced each other annually, pausing only during World War II. Other noteworthy elements of the series consist of Notre Dame's "Decade of Dominance" from 1983 to 1995 and USC's dominance from 2002 to 2009.

The two teams fight for the Jeweled Shillelagh Trophy as well as for bragging rights and school pride. The Shillelagh is an Irish club composed of Ireland’s oak or blackthorn saplings. In 1952, the trophy was introduced in order to commemorate the series’ first game after it was donated by the Notre Dame Alumni Club of Los Angeles. For every Notre Dame victory, a detailed emerald-studded shamrock is added to the trophy, while a ruby-adorned Trojan head is added after every USC victory. For games that ended in a tie, a combined Trojan head and shamrock medallion was used. Although the original trophy (now displayed at Notre Dame permanently) has been retired since 1995, a second shillelagh is currently on the move between USC and Notre Dame, depending on who claims the victory for a given year.

Overall, the rivalry is packed with dramatic events, emotional moments and stories of glory. Although the two teams are over a thousand miles away from each other for the majority of the football season, the excitement that their fans share is unmatched once the teams’ linemen are only centimeters away from each other. With Notre Dame and USC both currently recruiting at a high level, the rivalry will likely only grow more exciting and popular in coming years.