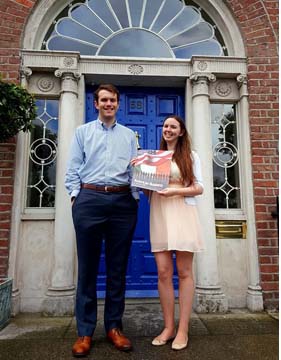 Patrick Butler and Maura Monahan stand outside the front door of the O’Connell House in Dublin, Ireland.

The American Chamber of Commerce in Ireland released a new report on Oct. 20 entitled, “Beyond Business — The Social Impact of U.S. Investment in Ireland.” The report contains research conducted by the University of Notre Dame on behalf of the American Chamber. The research sought to measure the social impact of American companies on Irish communities through employees’ participation in Corporate Social Responsibility (CSR) programs.

CSR brings social and environmental concerns into business operations in order to meet legal obligations and improve the quality of life for employees, community members and society as a whole. Companies encourage community involvement by matching monetary donations of their employees, offering time off and encouraging employee input as to what initiatives the company should support.

The report included data from 25 U.S. companies, including names like Aramark, Dell, Facebook, LinkedIn, Microsoft and Wells Fargo. Notre Dame designed the initial questionnaire that was distributed to the participating businesses. Two Notre Dame student interns, Patrick Butler and Maura Monahan, conducted further interviews to provide an understanding of how and why particular companies engage in different CSR activities.

“A very large part of [the report] is the work of Patrick and Maura, which is a great credit to the caliber, initiative and writing skills of young Notre Dame people,” says Kevin Whelan, director of the Keough-Naughton Notre Dame Centre in Dublin.

Whelan, along with his colleagues Eimear Clowry, assistant director, and Elaine Ní Bhraonáin, program manager, contributed to the report alongside the student interns.

For many U.S. companies, Ireland is their first encounter overseas and a major inroad to Europe. Whelan says Ireland is the perfect place for companies to run operations and make profits in Europe. Under European Union regulations, American companies cannot operate in Europe without having a base in Europe. Ireland is a stable country that offers an established market for businesses looking to expand internationally.

“Irish people are very pro-American,” Whelan says. “We get America, we understand Americans. For a little speck in the ocean, we have tremendous access for America.”

The figures in the report reflect the growing emphasis that companies put on CSR programs. Of the businesses included in the study, 63 percent have long-term charity partners, and 69 percent offer formal CSR programs. The report shows that the evolving consciousness of societal and environmental issues drives interest in CSR. The data indicates that employees want to work for companies whose values align with their own.

As a university, Notre Dame believes in the power of service, with over 85 percent of the student body participating in service of some kind. In his foreword of the report, Whelan stressed how volunteering enhances not only the lives of others, but also our own lives.

“We were delighted to partner with the American Chamber of Commerce in Ireland,” Whelan says. “And to have access to … gold standard American companies — Google, LinkedIn, Facebook, IBM — they’re all heavyweight players in American business. They’re strongly represented in Ireland, so it was a great way to showcase Notre Dame to those stellar companies as well.”