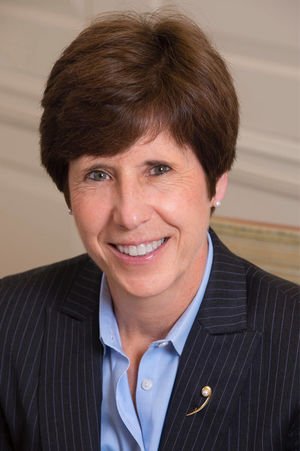 In a speech given at the 1940 Democratic Convention, Eleanor Roosevelt told the crowd: “This is no ordinary time.” Today, Mary Patricia (Pat) Hackett cites those same words as she campaigns to become the Democratic nominee for Indiana’s 2nd Congressional District. Hackett graduated from Notre Dame with a B.A. in theology and government (’81), an M.A. in theology (’83) and a law degree (’91).

Her campaign theme, dignity and justice for all, reflects her background in theology and law. Among the policies she supports are universal health care, better mental health and maternity care and campaign finance reform.

Like Roosevelt, Hackett finds that unity is necessary to help fix the country’s problems. “[We] have to be able to actually sit down and talk without labels,” she says. Although she is running in a conservative area, she believes that residents of her district will value unity and fostering conversation over maintaining party labels.

Hackett first started thinking about campaigning when Donald Trump won the election, and community members sought her out and asked her to run soon after. Outside of politics, she works as an adjunct law professor at Notre Dame and as a practicing attorney in South Bend.

Though she is deeply disappointed in Trump’s administration, Congress and current district congresswoman Jackie Walorski, Hackett’s primary reason for running is to support the needs of her constituents. “I cannot just continue to pursue law or teaching and stay on the sidelines,” she explains. “I need to engage at a national level.”

As a feminist, she also thinks that it is incredibly important to run in order to fight against misogyny and recent attacks on the wellbeing of women.

Her next steps involve travelling throughout the district — meeting, listening and talking to residents. “I am not going to go and just measure political winds. I will go and be honest about my positions but have an open mind. That is not a sign of weakness. It’s intellectual integrity and growth,” she says, emphasizing the importance of being accessible to her constituents.

At its core, her campaign is “about love of country —love for the people in the country and in this district.”