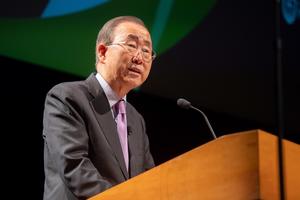 Our world is going through pronounced changes. New technologies are altering how we communicate, how we live and how we work. We must continue to work together. There is not a single person in the world, no matter how resourceful they may be, who can do it alone.”

It is with this call to global citizenship that former United Nations Secretary-General Ban Ki-moon framed his address to the students and faculty of Notre Dame.

“I am confident we have invaluable opportunities to change the world for the better,” he said. Ban’s talk, part of the third Asia leadership forum hosted by the Liu Institute for Asia and Asian Studies, took place on Sept. 12. His speech, tickets to which sold out weeks in advance, became the most- attended Asia-focused event in Notre Dame history. The overflow crowd watched on a video board just outside the Patricia George Decio Theatre.

“We welcome this opportunity to learn from the experiences of Mr. Ban so as to advance Notre Dame’s role in promoting global education and global research,” Univeristy President Rev. John Jenkins, C.S.C. said.

Ban served as the eighth Secretary-General of the United Nations from 2007 to 2016, when he was succeeded by António Guterres. During his time in office, he became known for his strong stance on issues of climate change and was instrumental in creating and conducting the 2016 Paris Agreement, which mandates policy on greenhouse-gas-emissions mitigation and other matters regarding climate change.

“As well as strengthening UN peace efforts,” John Hewko, general secretary of Rotary International and the Rotary Foundation, said, “[Ban Ki-moon] was also an advocate for diversity and international reform at the United Nations, promoting the rights of minorities and overseeing the creation of UN Women in 2010, dedicated to gender equality and the empowerment of women.”

Throughout his speech and later during a panel with Hewko and Sara Sievers, associate dean for policy and practice at the Keough School of Global Affairs, Ban emphasized the importance of women’s rights across the world.

“It is only logically necessary that women should be given fair treatment. I found the current policy unacceptable so I prioritized gender empowerment.”

Ban discussed how he intentionally placed women in positions of power to aid in this mission. One such woman is Amina Mohammed, special advisor on post-2015 development planning to the UN Secretary-General and recipient of the Ford Family Notre Dame Award for International Development and Solidarity in 2015.

In addition to gender empowerment, the former Secretary-General remains an advocate for climate change.

“We don’t have a plan B because we don’t have a planet B,” Ban said. “The Paris Agreement, signed by 197 parties, offers a clear game plan to confront these global threats. I truly believe this agreement offers our best hope. We need to work together. I must express my deep disappointment with the current U.S. administration’s decision to withdraw from the Paris Agreement. It is irresponsible. I am sorry to tell you that, unfortunately, President Trump will be standing on the wrong side of history.”

Ban’s talk ended with a call for the youth of the world to engage in global partnership and participation.

His passion for global citizenship aside, Ban expressed appreciation for the Notre Dame campus.

“This is such a special and inspiring American university,” Ban said. “Notre Dame’s history of academics, culture and legendary football team are all well- known around the world, including in Korea. Cheer, cheer for old Notre Dame!