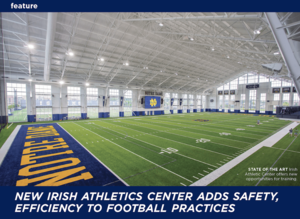 The Irish Athletics Center, an imposing new steel and brick facility complete with an indoor field and a large TV screen stands across the street from the JACC as well as the Guglielmino Athletics Facility (nicknamed “the Gug”). Its lofty ceiling (nearly 100 feet high) allows the Irish to practice their kicking and punting indoors during the cold winter months. Blue championship banners adorn the walls, and the building’s rows of tall windows let in ample natural light while providing a view of the adjoining soccer field. The building’s other features include a full-size goalpost, an artificial turf football field and an observation balcony that runs parallel to the indoor field. The Irish Athletics Center even boasts a sleek recruiting lounge on its second floor.

Despite the building’s impressive size and streamlined architecture, university officials have described its design as relatively minimalistic. “We put a building over a football field,” director of athletics Jack Swarbrick told the Indianapolis Star in 2018. “It doesn’t have a ton of other things.” The relative simplicity of the building’s design, as well as new NCAA rules regulating the speed at which athletics facilities can remain under construction, required Notre Dame to complete construction on a fairly tight timetable. Construction took place over the course of slightly over a year, concluding in summer 2019 and opening for use in August.

According to Notre Dame News, one purpose the new facility serves is to ease demand on the Loftus Sports Center, an indoor practice facility constructed in the 1980s. Loftus, used by so many different groups that it often operated for 18 hours a day, has served as a practice space for the Notre Dame Band as well as different sports teams. The massive Loftus Sports Center boasts an indoor field as well as a track and mezzanine seating space for 300 people. Despite its size, however, university officials have argued that the demand for the building had simply become too high. Rowing, football, track and field, lacrosse, baseball and softball athletes needed the facility for practice; Loftus even holds lacrosse games and track meets.

Scholastic spoke to interim director of football communications Michael Scholl about the unique functions the new facility has served. Scholl spoke highly of the Irish Athletic Center’s camera system, which allows teams to view practice footage in real-time. “It’s all permanently installed cameras that go back to a control room in the Gug, and our video staff sits in the Gug and edits from there. So they’re able to remote-control all the cameras.” According to Scholl, the new camera system — capable of relaying footage within seconds — has provided convenience as well as safety. “Nobody’s climbing up ladders or anything like that anymore, which is great … We do very little actual filming from towers or anything like that anymore, it’s almost all permanent structures now.”

As Swarbrick told the Indianapolis Star, Loftus was a difficult location to practice kicking (the ceiling over its Meyo Field stands only 54 feet high at its peak). The facility’s crowded conditions also meant that athletes could fall off the field and onto the surrounding track, creating the potential for injury. While it possesses a more minimalistic design than Loftus, the Irish Athletics Center has relieved a significant load on the former practice facility. The old facilities “made it difficult for our football team to train in there at an acceptable time,” head coach Brian Kelly told the Star. “It was overdue, and we’re thankful we were able to get it done.”