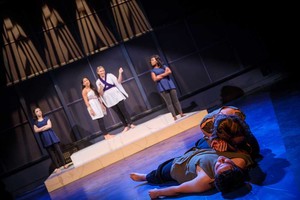 These plays were not only written by students, but directed, produced and performed by students as well. Jean Carlo Yunen Arostegui ‘17, director of “In Paradisium,” acknowledged that the drama was not without its directorial challenges.

“Some scenes were conceptually difficult to stage at first,” he admitted, “but after a month of rehearsal, we were able to put on a production we were really proud of.”

The play dealt with an alternate universe in which society is kept complacent by taking pills that produce happiness — until one woman decides to stop taking the pills. Yunen Arostegui believes the protagonist’s agency to choose and supporting characters’ facades of happiness reflect the emotional struggles people experience today.

Mary Patano ’17, director of “The Pink Pope,” said the concept of the play — a comedy about the first female Pope — presented an exciting “opportunity to direct something that would make some pretty big waves at ND.” Over a month of rehearsal, Patano and ChoGlueck led their team of actors through eight different versions of the play before settling on their final product. Though the revisions sometimes presented challenges, Patano emphasized that the collaborative environment encouraged the playwright, director and actors “to infuse their own thoughts on who their characters were and what they would say.”

“In the end, I was blown away by our final product,” Patano concluded. “The goal had always been to have fun with the piece, and through the incredible talents of our actors, technical designers, and everyone in between, we were able to create a farce that both entertained and informed, which for me was the ultimate goal of the production.”

The department of Film, Television, and Theatre’s season will conclude this semester with “Frankenstein,” running November 3-16.