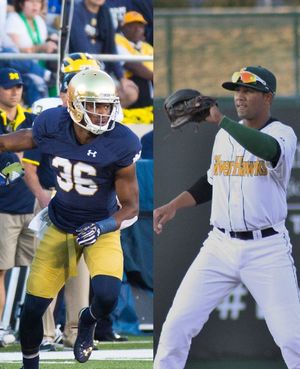 Call it a coincidence. Call it a small world. Whatever brought them together, Jamie Westbrook and sophomore Cole Luke, two natives of Chandler, Ariz. and childhood friends, now share South Bend as their new home.

Westbrook is the 19-year-old second baseman on the South Bend Silver Hawks, the single-A baseball affiliate of the Arizona Diamondbacks. Westbrook has been an everyday starter in the lineup and was key contributor to the team’s recent playoff run in the Midwest League. He played in over 130 games and hit .259 with 49 RBIs and 27 doubles. Westbrook also earned an award for his service work in the South Bend community during the season.

The Diamondbacks drafted Westbrook out of Basha High School in the fifth round of the 2013 MLB Draft and assigned him to the Arizona League. After less than a full year there, Westbrook started the 2014 season playing at Four Winds Field in downtown South Bend.

When Westbrook was 10, he moved from Massachusetts to Arizona to start fifth grade. He arrived at an unknown home and school with a need for friends. The first person Westbrook clicked with at his new grade school was Luke.

“I was the new kid and [Luke] took me under his wing,” Westbrook says. “He was popular and athletic, and so we kind of just hit it off and became pretty good friends.” Westbrook and Luke eventually ended up at different schools, but remained close through mutual friends.

“We went to separate junior high schools so we didn’t stay in contact much then,” Westbrook says. “During high school, [Luke] was a standout football player, and I was doing pretty well in baseball… We had the same group of friends, so we re-connected. We would be at parties when there was chaos going on around us, and we were off in the corner reminiscing about when we were in fifth and sixth grade.”

Before spring training last year, Westbrook ran into Luke in Arizona and told him of his potential playing destination in South Bend. The two planned to reconnect during the summer, when Luke had team workouts and Westbrook played in many home stands with the Silver Hawks. With Four Winds Field just minutes away from Notre Dame Stadium, the two have been able to follow each other’s athletic progress.

Luke has emerged as a new starter on defense in place of suspended cornerback KeiVarae Russell. The Irish were forced to quickly find a candidate to replace Russell’s nearly 30 starts and three career interceptions before the start of 2014, and Luke impressed during spring competition.

He gained valuable experience with limited snaps in 13 games last season, and was forced to become a steady presence as the team’s second Photo By Xule Li n AND Courtesy of south bend si lverhaw ks desi gn by Ash ley Knipp cornerback. Luke collected 15 tackles and two pass breakups in 2013. He embraced the challenge of an increased workload and quickly caught the attention of his coaches.

“Notre Dame is on TV every week, so I’ll definitely watch [Luke] when I’m back home and see how he’s doing,” Westbrook says. “I see him quite a bit in the offseason, and he knows what kind of season it’s been and how I’m doing. We have the same group of friends, so it’s not rare for us to run into each other. He knows baseball, believe it or not, and he’s been to a couple of my games here.”

As both players progress in their respective sports, they may once again find themselves in different regions of the country. A minor league baseball player is typically required to move several times in order to rise up the ranks of an organization. However, Luke and Westbrook will always have their childhood bond and similar interests in high level athletics to fall back on.

“It’s a small world. Who would have known my first friend in fifth grade would be in the same city as me when we are 19?” Westbrook says. “It’s cool that we stay in contact, and it’s all from sports. He was athletic and I was athletic, and that’s how it all got started. It’s just cool to stay in contact with one another this many years down the road.”