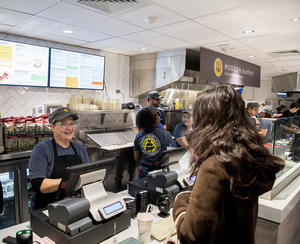 The opening of the new Duncan Student Center on Jan. 15 had special meaning for one alum.

Rob McColgan graduated in 2002 and co-founded Modern Market restaurants in 2009. The Duncan location marked the 27th store for McColgan and the company.

“I am very impressed with the student center as a whole and how great it was working with [Notre Dame],” McColgan says.

This was not the first partnership between the university and Modern Market.

McColgan and his partner Anthony Pigliacampo were working as in the finance and engineering industries when they decided to start a restaurant that served simple, healthy and good tasting food, because they had trouble ever finding such a place for lunch.

One of the first places they turned to for funding was Notre Dame’s McCloskey Business Plan Competition. McColgan credits the initial $25,000 dollars the group won in the competition to being integral to the company’s success.

At the time, the Eddy Street Commons project was in planning stages, and McColgan says some suggested that Modern Market try to be a part of it.

“We were like, we haven’t built a store yet, so not sure we would be selected. Now it is pretty cool to be a part of the next big retail project at the university,” he says.

McColgan first heard of the Crossroads project and potential business opportunity when he attended a reunion for the Applied Investment Management course taught in the Mendoza College of Business.

Though the student center is not like a typical Modern Market location, McColgan says they had just opened their first airport store and understood how to handle a non-street location.

Following a two week training period in which professionals taught new hires how to cook in Modern Market’s from-scratch method, the store opened for business and has often experienced long lines at the 2 p.m. lunch rush.

The former Morissey resident says he is excited for the store to enter into the campus dining ecosystem.

“There is a joke among my wife, who is also a grad, and our friends that I’m probably the biggest fan of South Dining Hall that ever existed.I just love it,” he says.

McColgan and Modern Market hope to now cultivate a campus fanbase of their own.