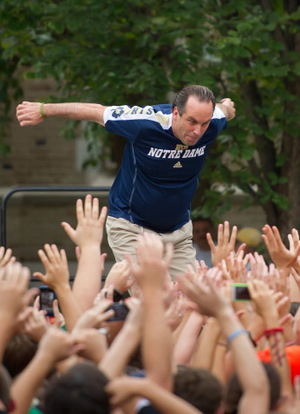 He jumps into a sea of students at a football pep rally. He fields questions from students in dorms. He embraces the front lines of the student section after a big win before he joins them in singing the alma mater. He persuades students to come to his weekly radio show at O’Rourke’s by ordering chicken wings for whoever shows up.

These are all routine activities for Notre Dame head men’s basketball coach Mike Brey, now in his 17th season at the helm of the Irish. The common thread in all his activities is his willingness — even desire — to engage with the student body, keeping students excited about the team and the season. Brey realizes that student presence is a driving force behind the Irish dominance in Purcell Pavilion.

Notre Dame came into the 2016-17 campaign ranked 40th among all NCAA Division I programs in home game win percentage, coming out on top in 78.9 percent of contests at the Joyce Center. In their last two full seasons, the Irish have a 31-4 record at home, including the 2014-15 season that propelled the Irish to their first ACC Championship. They currently sit at 15-2 at home this season.

Notre Dame’s success at home under Brey is no fluke. While the Irish have historically been extremely successful within the confines of the Joyce Center, Brey has in 17 seasons accomplished a feat three times that Irish coaching legend Digger Phelps did twice in 20 seasons: Go undefeated at home for a full season. Phelps did so in the 1973-74 and 1985-86 campaigns. Since July 2000, when Brey took over as head coach of the Irish, Notre Dame has completed a perfect slate at home three times (2006-07, 2007-08, 2010- 11). Furthermore, from the late stages of the 2005-06 season through Jan. 24, 2009, the Irish won 45 straight contests at home, breaking the school’s mark for most home games without a loss, which was set from 1943-48.

“I love our Sixth Man. I love the Legion, they’re the best,” Brey said, chuckling, during “The Mike Brey Radio Show” on Feb. 16. “They’re awesome on game day. Our student section has been fabulous all year, and they were great in the Florida State game (an 84-72 ND win). We’ve got two home games left so we can hopefully finish up strong.”

But Brey is not the only one who has recognized the correlation between the students’ presence and wins at home. Under Phelps in 1977, the Irish hosted unbeaten and top-ranked San Francisco, who had won 29 consecutive games to start their season and were looking to bring the total to 30 before the NCAA Tournament. When Notre Dame eventually pulled off a 93-82 upset over the Dons, NBC (which was broadcasting the game) awarded its Player of the Game Award to the Notre Dame student section. As NBC saw it, the students were the impetus for the raucous crowd that shook, stirred and eventually subdued the Dons for their first loss of the season.

In just the last couple of years, Brey has also participated in a variety of activities off the court in order to strengthen his rapport with the students. He has visited the residents of Dillon Hall, Stanford Hall and Fisher Hall, meeting and speaking with them on a wide range of topics, including —not surprisingly — leadership and basketball. He has also met with students interested in the Alliance for Catholic Education (ACE) program, which prepares college graduates for careers in education. ACE focuses on lowerincome neighborhoods, harkening back to Brey’s days at DeMatha Catholic High School in Hyattsville, MD.

“Maybe that’s the old high school teacher in me,” Brey says. “You connect with your students, and I really appreciate all they do. So I like jumping up there with them and singing the alma mater with them.”

Brey’s compares his style to that of a high school coach and teacher, and that is a very reasonable assessment. While demanding the most from his players, he is often regarded as one of the most player-friendly coaches in the sport. Just like high school coaches and teachers, Brey forms special bonds with the students he coaches. That helps explain why many players choose Brey and Notre Dame over their other options. They make their choice not necessarily for their prospects of playing professionally, but more for the opportunity to play for one of the most respected coaches in the game.

His “laid-back attitude” is what drew sophomore forward Matt Ryan to continue his basketball career for Brey at Notre Dame. “[Coach Brey] mentions after big games how important it is to thank all the students who show up because it really helps,” Ryan says.

He’s surely not the only collegiate coach who commands and rightly deserves respect. But it isn’t often that high-profile coaches engage the supporting students as much as Mike Brey does, and that behavior signifies a coach who truly is a man of the people.