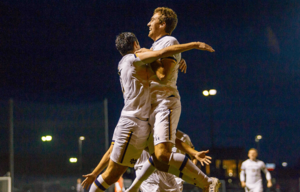 The men’s soccer team had many thrilling moments coupled with some tough losses to bear during the regular season. Although the Irish lost four home games — three of which came against top-fiveopponents in Indiana, Michigan State and North Carolina — in addition to two away games, the team still won four games inside Alumni Stadium, including a win over No. 6 Louisville. Having compiled 10 wins in its first season under new head coach Chad Riley, class of 2004, the team then turned its sights toward the ACC Tournament.

The ACC Tournament brought with it the hopes of clinching a conference title. Notre Dame’s first tournament matchup was against Clemson on Oct. 31. In the opening minutes, senior Ian Aschieris tallied the match’s first goal, heading in a cross from fellow senior Sean Dedrick.

Later, the Irish defensemen continued to sweep the ball away from the Tigers’ offense while the Irish forwards continued to seek opportunities to score again. At the 87th minute, Aschieris scored his second goal of the night after taking advantage of a through ball from freshman Jack Lynn to seal the win for the Irish.

With a 2-0 victory over the Tigers, Notre Dame advanced to the next round of the tournament which brought a trip to — and rematch with — Louisville. The first half of the match against the Cardinals was scoreless as both teams battled for possession and neither could establish much momentum. Although Lynn, senior Felicien Dumas and junior Jack Casey each had great scoring chances, Louisville’s defense stood tall and kept the Irish off the board. At the start of the second half, the Irish put even more pressure on the Cardinals’ back line, yet the match remained scoreless after shot attempts from Aschieris and senior Sean MacLeod came up empty. Ultimately, the dagger of defeat fell on the Irish when the Cardinals launched a counter attack and scored at the 86th minute. The lone goal was the decisive tally in the 1-0 Louisville win, eliminating the Irish from the tournament.

Despite the team’s failure to win the ACC title, several players have already made numerous accomplishments during this season. Through the ACC Tournament, graduate student Patrick Berneski and senior Thomas Ueland tied for the team lead with six goals apiece. At one point, Berneski — one of Notre Dame’s captains and starting center backs — had scored more goals than any other defenders in the conference. The conference also recognized a number of Irish players, as Berneski and Ueland were both second-team All-ACC selections, while Dumas and junior Tommy McCabe made the third-team All-ACC list. Finally, Berneski, Casey and Ueland were all named to the 2018 College Sports Information Directors of America (CoSIDA) Academic All-District Teams.

Even as the cold weather enters South Bend, the Irish look to remain hot entering the NCAA Tournament. Notre Dame will take on the winner of Michigan vs. Princeton in the second round on Nov. 18, with every match carrying the added pressure of elimination should the Irish lose.

Regardless of the team’s finish in the tournament, there is still an incredibly bright future in the upcoming seasons, even as another talented senior class graduates in the spring. With Riley in place as the new face of the program and a wealth of talent — including eight freshmen — returning next fall, the men’s soccer team will be one to watch, both for the rest of this season and in the years to come.