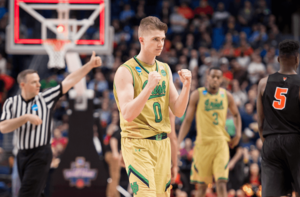 Great potential can change to heartbreak so quickly. Hard to believe? Just ask the 2017-2018 Notre Dame men’s basketball team, who began the season with high expectations just to see them shattered by injury and close losses.

Last year’s team looked poised to outperform their second-round exit from the previous season’s NIT NCAA Tournament. With a plethora of returning players and the addition of freshman forward D.J. Harvey, the Irish began the season ranked No. 14 in USA Today’s preseason poll.

Senior leaders Bonzie Colson and Matt Farrell helped the Irish breeze through easier opponents en route to the championship game of the Maui Invitational. Paced by Colson’s 25-point performance, the Irish pulled off a thrilling upset over No. 6 Wichita State by a score of 67-66 to win the tournament.

The momentum didn’t last. The Irish dropped three of their next five to No. 3 Michigan State, Ball State, and Indiana.

Then the real heartbreak set in. On Jan. 3, Coach Mike Brey announced that Colson would miss at least eight weeks due to a broken foot. Farrell and Harvey also missed numerous games due to injuries of their own.

Without three of their top scorers, the Irish finished the season with a disappointing 20-14 record that left them out of the NCAA Tournament. Although Notre Dame was a top seed in the NIT, they fell in the second round to Penn State to end the season.

It’s time to start talking about great potential once more because this year’s team certainly has it. If there’s one way to positively spin last year’s injuries, it’s that they allowed juniors T.J. Gibbs, John Mooney and Nikola Djogo to increase their minutes and gain experience.

On top of returning talent, the program adds its best recruiting class of the Mike Brey era with four of the top 100 recruits according to ESPN.

Need another reason to be excited? The Irish will also add former top 100 recruit Juwan Durham, a UConn transfer who sat out last season due to NCAA rules.

Similar to last season, the Irish will have a daunting nonconference schedule that includes a three-game stretch against Oklahoma, UCLA, and Purdue. All three of these foes made the NCAA Tournament last season with Purdue advancing to the Sweet 16.

The first game of this gauntlet against Oklahoma in New York City for the Jimmy V Classic could be a great way for Notre Dame’s young stars to adjust to a big spotlight. Oklahoma lost two stars in Khadeem Lattin and Trae Young, making them more inexperienced than in years past. If Notre Dame’s younger athletes come to play in their first real test, this is a winnable game for the Irish.

The next game won’t be so easy. Notre Dame’s first true road game is in Pauley Pavilion against UCLA. Lucky for the Irish, though, veterans such as senior Rex Pflueger—a California native—and Gibbs have played in front of raucous crowds before. Notre Dame’s frontcourt will be tested against two physical, five-star recruits for the Bruins, Moses Brown and Shareef O’Neal. This game projects to be an entertaining one and an opportunity for the Irish to make a statement win on the road.

Four days after playing at UCLA, Notre Dame will have to take on Purdue in the Crossroads Classic in Indianapolis. The Boilermakers return a potential Wooden Award candidate in junior guard Carsen Edwards. Purdue also has an established big man, senior Matt Haarms, along with an impressive freshman class headlined by Emmanuel Dowuona.

The 2018-19 Notre Dame men’s basketball team promises to be an exciting one to watch.  The blend of freshman star power and returning leaders give the Irish a balance that will serve them well. The first thirteen games will tell a lot, especially those versus Oklahoma, UCLA and Purdue.

Buckle up, the madness is almost back.