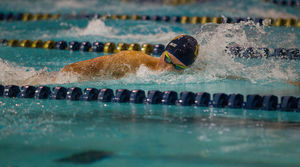 As of Nov. 12, 2018, multiple sports teams at Notre Dame remain undefeated. Most people are probably thinking of the Fighting Irish football team right about now, but the women’s swim team is also among the unbeaten.

In the latest TYR rankings, the Irish women’s team moved up five spots to No. 13 in the nation. The team boasts a 7-0-1 record with victories over highly ranked Kentucky and Missouri, among others. The solo tie came against sixth-ranked Indiana.

A number of different swimmers contributed to this strong start, in particular junior Abbie Dolan. Dolan was recently named the ACC Swimmer of the Week for her performance in a dual meet against Virginia Tech and Pittsburgh. Over the two-day meet, Dolan finished in first place in seven of the events. She posted six times that currently rank among the top-20 in the NCAA this season.

The men’s team has also had a solid start to the season and is currently ranked No. 18 nationally in the TYR top-25 rankings.

In its first meet, the men’s team faced difficult opponents in Indiana, Kentucky and Missouri as the Irish lost to all three in tightly contested matches. The team bounced back by winning four of its next five meets to reclaim its spot in the top 25.

Looking ahead, nine of the top swimmers on both the men’s and women’s teams have been selected to compete in the inaugural ACC/ Big Ten Challenge at Purdue. The event will feature some of the best swimmers in the country as well as the world, with past Olympic athletes also competing in the races.

The Irish will look to keep building off of their momentum from the fall season as they head into this tournament and into the winter season.