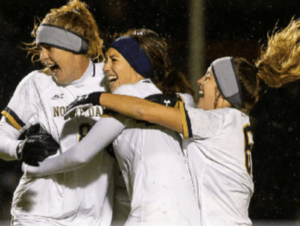 On Oct. 31 and Nov. 1, Notre Dame women’s and men’s soccer played the final game of the regular season at Alumni Stadium, vying for seeding in the ACC tournament. Two weeks later, the teams now seek to make an even bigger statement in the NCAA tournament.

This season presented unique challenges for head coach Chad Riley’s team. One of the toughest schedules in the country, untimely injuries and some bad breaks with referees left Notre Dame with a 9-6-1 record and a 3-5 mark in the ACC.

Ranked No. 9 in the country in the preseason poll, the Irish had high expectations following their national quarterfinal appearance in 2018. However, following a 3-0 start, the Irish went 1-3-1 in their next five games. Two of those losses came to elite opponents — No. 2 Clemson and No. 4 Virginia — but the stretch still left the team with questions they needed to answer, and quickly.

In early October, Notre Dame won back-to-back games at home over Purdue Fort Wayne (8-0) and No. 21 Duke 1-0. The tides seemed to be turning.

The next two games proved to be the most frustrating losses on the season for the Irish. On Oct. 18, Notre Dame jumped out to an early 1-0 lead over Virginia Tech, but the Hokies responded with the equalizer in the 62nd minute. Just 18 minutes later, they allowed Virginia Tech to score the game-winning goal, moving Notre Dame to 1-5 in the ACC.

Four days later, Notre Dame took on their Big Ten rival Michigan. With the score 0-0 in the 89th minute, Michigan was awarded a penalty kick on a foul at the edge of the box. Michigan converted. Notre Dame then had a chance for a penalty kick of their own due to a Michigan hand ball, but no call was made, and the Irish lost 1-0.

In the final week of the season, the Irish had to dig deep, and they did. Notre Dame pulled off a much needed 1-0 upset at No. 2 Wake Forest thanks to a goal from Patrick Coleman. On Nov. 1, the Irish blanked Pitt 1-0 to earn home field for the first round of the ACC tournament.

As the eight seed, Notre Dame took on the nine seed Boston College for the right to play the regular-season conference champion Clemson. The Irish fell behind 1-0, but graduate student Ian Aschieris scored a timely first goal of the season to tie it up. In double overtime, Notre Dame advanced on a Boston College own goal drawn by Notre Dame’s junior forward Aidan McFadden. The Irish did not have the same luck versus Clemson, losing 3-0.

Selection day for the men’s NCAA tournament is Nov. 18. Despite the fact that Notre Dame has lost its most regular season games since 2000, the Irish are still ranked No. 15 in the RPI and have a good chance to make the tournament. Whether or not they can make the national quarterfinal for the second straight year is a much taller task.

The women’s soccer team came into 2019 determined to rebound after a disappointing 2018 season in which the Irish went 8-10, finishing below .500 for the first time in program history, and missed the NCAA tournament.

This year brought more positive results. The Irish finished 10-7-1 overall and 4-4-2 in conference. Most impressive, Notre Dame proved nearly unbeatable at home with a 7-1-1 record.

August and early September saw the Irish flying high, mainly spurred by their lockdown defense. The team won their first six games for their best start to a season since 2008, defeating their opponents by a combined score of 13-1.

However, the Irish dropped their next three decisions to No. 7 South Carolina, Iowa, and No. 10 Clemson, each by just one goal.

In conference play, the Irish took care of some easier opponents such as Pittsburgh, Syrsacuse and Miami but struggled against the giants of the ACC. No. 4 UNC and then-No. 1 Virginia both beat Notre Dame handily, each winning 3-0.

Like with the men’s team, the women’s squad had a lot to prove heading into the final three games of the season. The Irish sat on the verge of the eight-team ACC tournament and needed some positive results to secure them a spot in the postseason.

In perhaps their most exciting game of the year, Notre Dame drew No. 9 Duke 1-1 in Durham thanks to a late goal from junior forward Olivia Wingate.

The momentum did not last long. Two days later, the Irish lost 3-0 to the NC State Wolfpack. Heading into the final game of the regular season versus Wake Forest, Notre Dame needed a win to lock up a spot in the ACC tournament. In a wacky game which saw Wake tie the score with nine seconds left, the Irish won 3-2 in overtime off a Wake Forest own goal.

After sneaking into the conference tournament as the eight-seed, Notre Dame took on North Carolina for a rematch in Chapel Hill. However, with injuries to forwards Eva Hurm and Luisa Delgado, the Irish suffered the same result — a 3-0 loss. Next, the Irish will take on Saint Louis in the first round of the NCAA tournament.