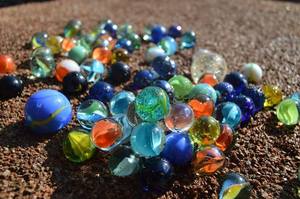 It’s a close race: competitors zipping around the final turn, neck and neck with each other. When the race started, you didn’t really care who won, but Team Galactic sounded cool and its competitor is named Starry. You started rooting for them, and now you’re on the edge of your seat waiting to see if your team can bring home the gold.

“Galactic will have a narrow lead coming off the ramp. Can they hold it?”

The commentator narrates the action as if it were Formula One race cars zipping around the track. In reality, it’s just marbles.

Marble racing isn’t a new idea, but it is a new phenomenon. Jelle’s Marble Runs have been around for years but remained a niche interest until more recently. After all, not many people would choose to watch marbles dueling it out on a track instead of watching sports.

But now, as people are holed up at home with no sports to watch, marble racing has found an audience — and captivated it.

You continue to watch as Starry, the Team Galactic marble, struggles to hold off its challengers as the race continues.

“They do hold the lead into the final lap of the opening Grand Prix of Marbula One!”

You’re not the only one who finds yourself entranced by the race you started watching as a joke. Less than a month after it was published, the video has 1,372,618 views on YouTube. The channel has more than 785,000 subscribers.

This is the sports world in a global pandemic.

“With everything that’s been going on lately, this was much needed,” one YouTube user wrote in the comments.

“This is the best event I’ve seen so far,” another said. “Ever.”

“Please add children’s sizes to your apparel store,” another commenter implored. “My kids can’t get enough of your channel!!”

Of all things, why has marble racing gained such an enthusiastic following? Well, it’s slim pickings in the sports world right now. Sports fans are faced with a choice between watching marble racing and watching NBA stars play video game simulations of themselves. Spoiler: you might find yourself watching both.

But while the simple lack of sports may be what draws people to Jelle’s Marble Runs, the production value of the videos keeps people watching. Marble racing is treated as a real sport: live commentary, solid graphics and good competition. In the race to the finish line, you wait anxiously to see if Team Galactic can close out the race.

“It will be Team Galactic and Starry getting the win!”

Starry edges second-place finisher Hazy by 0.05 seconds, a margin of victory that is as tight as many intense Olympic finishes. Cheers play in the background, and the marbles in the stands move back and forth as if they’re clapping. You just spent eight minutes watching marbles circle around a track, but when the video for the next race pops up, you’re ready to do it again.