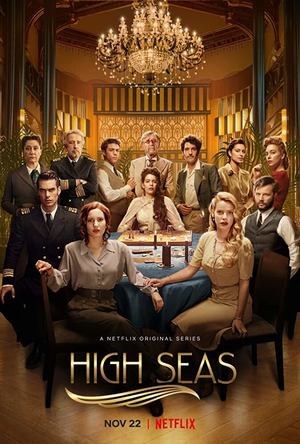 If, by this point, you're already tired of the same old suspense, drama and romance plots that American shows and movies have to offer, I come bearing good news. For times plagued by pandemics, like the Spanish flu, Spanish television offers a cure — albeit only for boredom.

“High Seas,” a Netflix-produced show, has the precise amount of crime, ghosts and romance one needs in these uncertain times. It is set in the late 1940s and follows the story of two sisters, whose father has recently died, on a luxury cruise ship traveling from Spain to Brazil. If you enjoy a good, old-fashioned, Clue-like mystery, but still like being challenged to figure out everyone's secrets before plot twists reveal them, this is the show for you. Plus, you can pretend that you're on a cruise at times when actually being on one is inadvisable. Join in the thrill from the comfort of your own home!

Since we're talking about good, old-fashioned mysteries, I cannot in good conscience omit “Gran Hotel” from this list. I devoured this show last summer — so, again, if you enjoy reading and watching detective stories, look no further (or actually, maybe do; there are many more recommendations for you). This Spanish drama is set in the early 1900s, when the country was ruled by King Alfonso XIII. The plot revolves around the Gran Hotel's owners (the Alarcón family), the staff and the mysteries that surround them.

Julio Olmedo, the main character in “Gran Hotel,” goes to the hotel to visit his sister Cristina. When he is told she was fired a month prior to his arrival, he takes a job as a waiter, determined to investigate Cristina's disappearance. He finds a confidant and partner in Alicia Alarcón, the daughter of his employers. The historical costumes, the music, the romance and the complex relationships between characters make this drama exquisite and intriguing, and make up for any initial misgivings I had about its decade-old effects. And the town detectives offer a comical — if not endearingly nostalgic — nod toward Agatha Christie's Hercule Poirot and Captain Hastings.

True to the popularity of historical dramas among Spanish TV watchers, “Cable Girls”  is set a century ago, in the 1920s. In this soapy show, four friends from the National Telephone Company explore life, work and love in Madrid, and how they live out their role as women in a misogynistic society. This show leaves nothing to be desired in terms of suspense and romance; the cliffhangers and complicated storylines will leave you wanting more. While I have yet to finish it, this show promises to be a loyal comfort in times of uncertainty and much-needed respite.

So, put those English subtitles on (or not!), cozy up with a cup of your preferred hot beverage and enjoy the endless entertainment and distractions that love, crimes and history in Spanish television can offer you in these crazy times.