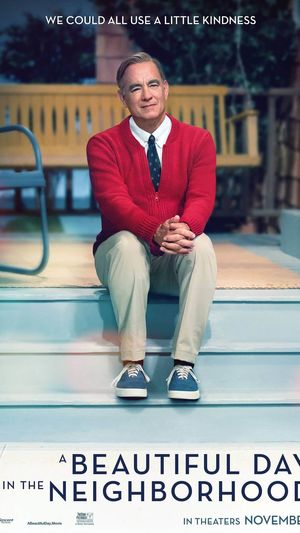 “It’s a Beautiful Day in the Neighborhood,” a late-2019 film directed by Marielle Heller, tells the story of the real relationship between Mr. Rogers (Tom Hanks) and investigative reporter Lloyd Vogel (Matthew Rhys), who is assigned to write a feature on Mr. Rogers for his magazine. Initially considering himself above such a menial assignment, Vogel grows fascinated with Mr. Rogers as he spends more time with him. Their professional relationship soon blossoms into a friendship that is underscored by the contrast between Vogel’s jadedness and Mr. Rogers’ infectious good nature.

Having never watched Mr. Rogers growing up, the movie, which is loosely based on a true story, allowed me to meet him as if I were a child immersed in his beautiful neighborhood. The contrast between Mr. Rogers and the reporter highlights their different approaches to life, but those differences also connect the two characters as they help each other grow. The deep and dark themes of the movie — exploring severed relationships and family trauma — do not detract from Mr. Rogers’ positivity, empathy and kindness. An uplifting movie that does not sugarcoat life, “It’s a Beautiful Day in the Neighborhood” captures the compelling beauty of Mr. Rogers.