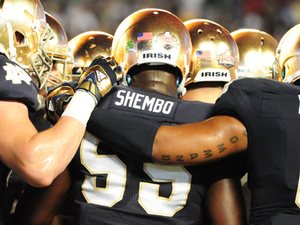 Player surnames on jerseys made their professional sports debut with the 1960 Chicago White Sox; they were designed to help fans watching on TV identify the players. Surnames became a trend that swept the nation and spread throughout the sporting world.  Today, all major professional leagues require jersey names except, ironically, Major League Baseball.  Jersey names are also nearly ubiquitous in Division I college football, with a few very notable exceptions.

Despite its recent downward slide, Notre Dame football will play LSU in the Music City Bowl.  If the practice of recent years holds, this means that players’ names will be added to the back of their jerseys for the final game of the season.

The traditionalists shake their heads, but let it pass.  If the beloved blue and white must be desecrated by script on the back, let it be for only once a year.

The Irish are one of a few elite college programs that neglect this now-common practice throughout their regular season.  The oft-cited reason is the preservation of team unity and hallowed tradition; question it and and you’re likely to be accused of blasphemy.  You’ll probably also hear the old adage, “It’s not the name on the back of the jersey that matters, it’s the name on the front.”  They’ll be metaphorically speaking on this one, because there’s no name on the front of the jersey, either. Such is the nature of the instantly-recognizable Notre Dame football. The college football team has no need to announce itself. 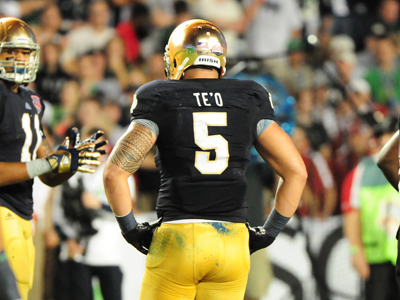 The team’s prominence is a huge asset to the university.  According to Forbes, Notre Dame’s football team is the second most valuable college football program in the United States as of last year. They are worth $117 million and bring in $46 million in profit per year. The team also provides the university with invaluable exposure. The boys in the gleaming gold helmets are the best advertisement for Notre Dame. The number of undergraduate applications spiked after the team’s undefeated 2012 season.  There’s no denying the contribution this team makes to the school.

The hot-button issue today is the acknowledgement, monetarily or otherwise, of the contribution of the individual player. The overbearing power of the National Collegiate Athletic Association (NCAA) and the compensation (or lack thereof) of student-athletes are fiercely debated topics in the sports world today.  Prominent figures like ESPN college basketball analyst Jay Bilas are militant in expressing their views that student-athletes are exploited by the current system; at the same time, many others hold that a full scholarship should be enough payment.

While players are prohibited by the NCAA from profiting from their own likenesses, a search for football jerseys on the Hammes Bookstore website yields jerseys bearing the numbers 5, 9 and 25 available for purchase at upwards of $100.  These numbers belong to Everett Golson, Jaylon Smith and Tarean Folston, three of the Irish’s best players.  As soon as a new crop of stars come through the program, the numbers on those jerseys will change and Notre Dame will continue to profit from players’ individual successes.  The players see none of the money they generate for the university.  And when you play for the Irish, you don’t even get to wear a jersey with your own name on it. 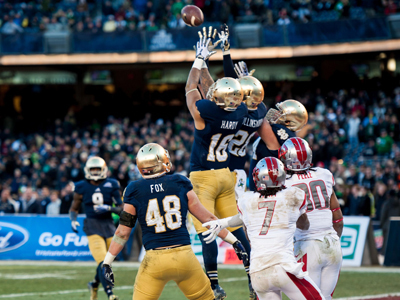 Since their birth, jersey names have taken on an entirely new significance.  Their fundamental purpose is to bestow recognition on the individual player.  To neglect this essential part of the jersey is to unequivocally reduce the player to a cog in the machine.  And that’s exactly what they are: components of a moneymaking juggernaut that supplies the university with millions of dollars in revenue every year.

Football is a violent, gladiatorial sport in which players’ faces are obscured. Making player surnames a regular feature of the uniform would be a nod to the individual.  It would not harm the collective spirit of the team. It does not involve the controversy of paying players.  It is a matter of pride and a matter of principle.  It is petty to deny the players this simple dignity in the name of pure tradition or quaint notions of how things ought to be.