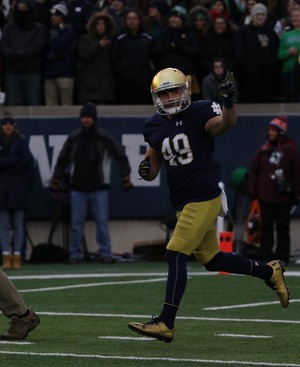 “I have no doubts that they will have the effort, the intensity, all those things necessary (to rebound next week). But they’re going to have to battle again late in the game and find a way to win the football game.” - Coach Brian Kelly

The second-to-last home game of the 2016 season, the final contest at home for Notre Dame’s seniors, felt eerily similar to most of the team’s previous 10.

Just like those 10, the Irish (4-7) were close on Saturday, but in the subfreezing temperatures, they could not close out Virginia Tech down the stretch, and the Hokies (8-3) stormed back from a 10-point deficit after three quarters to escape Notre Dame Stadium with a 34-31 win.

DeShone Kizer was 16-for-33 in the game, throwing for 235 yards and two touchdowns while adding 69 rushing yards on 16 carries. However, he was a non-factor in the final play of the game. Kizer scrambled for seven yards on fourth-and-5 near midfield with 17 seconds left on the clock to keep the game alive, but he was shaken up as he was tackled. Because officials stopped play to allow the Notre Dame medical staff time to get to Kizer on the field, he had to sit out for one play. In what became Notre Dame’s final play, Malik Zaire could find nobody open downfield and the clock ran out as he threw to Equanimeous St. Brown. The pass was ruled complete, but a flag on the Irish negated the play, and the game ended with the Irish once again within a possession of winning but falling short in the final seconds.

The loss stung not only because it clinched Notre Dame’s first losing season since 2007, but also because it made the team’s path to a postseason bowl game much more difficult. (Ultimately, any chance the Irish still had of making a bowl disappeared with their loss the next week at USC.)

“I just don’t think we executed quite as well offensively (after halftime),” Kelly said after the game, according to UND.com. “I thought we weren’t as sharp in the second half as we were in the first half. I think maybe a couple things we could have done better in terms of play calls. A little bit of everything. I don’t think there was one specific thing I can put my finger on.”

The Irish got on the board early as Josh Adams took the handoff and snuck through the line for a one-yard touchdown run. On Virginia Tech’s opening drive, quarterback Jerod Evans was sacked by James Onwualu, who forced a fumble that the Irish recovered at midfield. Justin Yoon connected on a 25-yard field goal 13 plays later to give the Irish a 10-0 lead, which would hold through the rest of the first quarter.

Both teams found their offensive rhythm in the second quarter. The Irish kept rolling, as their first play after the break was a 31-yard touchdown pass delivered by Kizer to Chris Finke for the sophomore’s first touchdown of his career. Virginia Tech responded with a touchdown drive of its own, culminating with a 23-yard rush by Evans to cut the Irish lead to 17-7.

The two sides exchanged punts before alternating touchdown drives, with Notre Dame going into the half leading 24-14. In the third quarter, the Hokies picked up right where they left off. Set up by a 62-yard pass from Evans to C.J. Carroll, Steven Peoples ran for a two-yard touchdown that brought the score to 24-21.

The Irish followed with a punt, but Virginia Tech’s next offensive play resulted in Drue Tranquill intercepting a deep pass by Evans at Notre Dame’s 22-yard line. Four plays later, Adams found a hole and raced 67 yards for his second touchdown of the game and fifth of the season, returning the Irish to a 10-point cushion, which stood firm through the end of the quarter.

That was the last bright spot for the Irish offense.

After an Irish punt, Virginia Tech marched downfield in eight plays and tied the game after Evans completed a seven-yard pass to Bucky Hodges with 9:13 left in the game. The Irish were forced to punt again, and the Hokies used 10 plays and over four minutes off the game clock to kick a goahead 20-yard field goal. The kick gave them the 34-31 lead that they would maintain to pull out the win.

“I have no doubts that they will have the effort, the intensity, all those things necessary (to rebound next week),” said Kelly. “But they’re going to have to battle again late in the game and find a way to win the football game.”