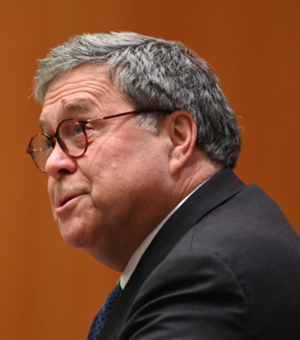 Photo Courtesy of the University of Notre Dame

“I think we all recognize that over the past 50 years, religion has been under increasing attack,” Barr said. “Secularists and their allies have marshaled all the forces of mass communication, popular culture, the entertainment industry and academia in an unremitting assault on religion and traditional values.”

Barr spoke at length about the great experiment of American democracy. The American constitution granted citizens a great deal of individual freedom, he said. That freedom, he contended, must be restrained by a Judeo- Christian moral system, tempering the human “capacity for great evil.”

“In the framers’ view, free government was only suitable and sustainable for a religious people, a people who recognize that there was a transcendent moral order antecedent of both the state and the man-made laws,” Barr said. “Our constitution was made only for a moral and religious people. It is wholly inadequate for the government of any other.”

The rise in secularism has led to a rise in social ills such as drug abuse, depression and the “illegitimacy rate” — the percentage of children born to unmarried parents, Barr argued.

Throughout his speech, Barr decried “secular” policies that, in his view, infringed on religious freedom. He criticized sexual education curricula in public schools that teach material about gender identity and sexual orientation. He also listed abortion rights, mandatory contraception coverage on health care plans and anti-discrimination protections for LGBTQ employees as examples of a secular agenda.

Barr’s arrival on campus came only days after he was implicated in the impeachment inquiry of President Donald Trump. His speech was met with a protest by Notre Dame students and members of the South Bend community.

Sheila Gregory, co-president of Notre Dame College Democrats, said she thinks Notre Dame administrators chose not to advertise Barr’s arrival “because they know full well that this Attorney General is complicit in multiple crimes that are being committed at the highest levels of the administration.”

In an interview with Scholastic, Professor David Campbell, chair of Notre Dame’s political science department, pushed back against some of Barr’s claims about religious freedom.

“The imposition of secularism, I would say would be the overt replacement of religious values with secular values,” Campbell said. “I don’t see any evidence that that happens because we have an extraordinarily robust set of religious institutions in America.”

Campbell said Barr’s interpretation of the First Amendment could be contested.

“I would say that not having government support for these expressions of religion is not an imposition of secularism, it’s actually merely the separation of church and state that, in turn, allows individual religions to thrive,” he said.

“He’s using in the speech, pretty incendiary rhetoric,” Campbell said. “This is the sort of thing that you might expect on the campaign trail, or from a political pundit, maybe less from the Attorney General.”

Barr’s speech, Gregory said, was “frankly very embarrassing” for Notre Dame, adding, “You don’t want to show how Catholicism can be a force for good by saying that anyone who doesn’t abide by that religion is somehow contributing to the destruction of society.” The Notre Dame

College Republicans did not respond to a request for a comment.

Over the past several years, Notre Dame has grappled with similar debates about religious liberty. Campbell pointed out that in 2017 the university sued the federal government because it objected to providing contraception through its employee health care plan. Even though the university won that suit, Campbell noted, it ultimately decided to provide contraception after facing backlash from students and employees.

“I suspect that the administration would not be completely on board with everything that the Attorney General said but be sympathetic to at least some of it,” Campbell said.

According to Barr, more people are increasingly identifying as secular — meaning they derive their worldview from non-religious sources.

In the midst of increased partisan tensions nationwide, Barr’s visit served as a reminder of Americans’ heightened sensitivity to questions about religion, politics and identity, Campbell observed.

“It’s a remarkable turn in the national conversation about the relationship between church and state, which is, you know, pretty fraught,” he said. “Because the vision he’s laying out is not just a legal argument, but very much an example of a continuation of the culture war.”

And this conflict, Campbell predicts, will not end anytime soon.

“We can inevitably expect to find more of that kind of debate going forward.”