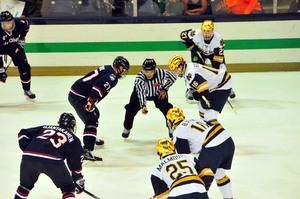 Skating into its final season in the Hockey East Conference, the Fighting Irish hockey team looks to its juniors to lead a team of young talent.

In their regular season opening two-game series, Notre Dame defeated Arizona State at home 9-2 and 4-2. The ninegoal tally is the highest the Irish have scored since scoring 10 against Canisius on Dec. 29, 2010.

Led by captain goalie Cal Petersen and alternate captains Anders Bjork, Luke Ripley and Jake Evans (all juniors), the Irish may seem young, but play with experience. Three of the four top scorers –– Bjork at the top, Evans and junior Jordan Gross –– return for the 2016-17 season.

In Petersen, whose .927 save percentage ranks 12th overall, the Irish boast one of the best goaltenders in the nation. He is one of 20 players named to the Mike Richter Award watch, which honors the top goaltender in NCAA Division I men’s hockey.

Heading into their first road game of the season, a twogame series against Minnesota Duluth, the Irish were ranked 5th against the No. 4 Bulldogs. The Irish split the series, losing the first game 4-3 and winning the second 3-1.

Sophomore Andrew Oglevie led the Irish with 14 shots on goal in the series. Bjork’s goal and two assists brought his season point total to 10, among the highest in the nation.

The Nittany Lions of Penn State drew with then-No. 3 Notre Dame in the first game of the two-game series before handing the Irish a 3-2 overtime defeat in the second. Notre Dame is the highest ranked team that Penn State has beaten in the program’s three-year history.

At the conclusion of the 2016-17 season, Notre Dame will leave Hockey East for the Big Ten Conference, home to Penn State and six other schools. The matchup previewed next year’s competitive conference.

The Irish returned to Hockey East play on Oct. 27 for a two-game home matchup with Connecticut. After falling 4-2 in the opener, the offense tallied four third-period goals en route to a 6-2 win that split the series and moved Notre Dame to a 4-3-1 (1-1-0 Hockey East) record thus far.

The Irish will face off in a two-game series against the Northeastern University Huskies on Nov. 12 in Boston, and they return to Compton Family Ice Arena on the 17th when they host UMass-Lowell.