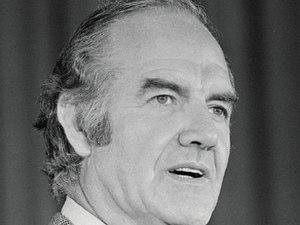 Ask about Hesburgh’s involvement in presidential politics, and you’ll have to clarify his involvement with which president. The fact that not one, not two, but six presidents, from both the Republican and Democratic parties in the age of partisanship, sought Hesburgh’s opinion over the decades demonstrates his national recognition.

Hesburgh first came to the national political arena during the 1950s as an advocate for voting rights and civil justice for African Americans. He became a member of the Commission on Civil Rights in 1957 under President Dwight Eisenhower. Following the Commission, Hesburgh was recognized as a civil rights juggernaut and was called upon to serve on numerous boards. He chaired the Commission on Civil Rights from 1969 to 1972 until President Richard Nixon dismissed him for his challenging remarks of the administration. He worked as a member of the Presidential Clemency Board of President Gerald Ford, tasked with determining the fate of Vietnam War offenders.

Though Hesburgh is remembered as a national and international leader through his 16 presidential appointments, interactions with six U.S. presidents and four popes and his membership on several national committees, it is often overlooked that Hesburgh was once considered as a potential running mate of George McGovern in the 1972 presidential election.

“[Hesburgh] was well-known as a figure with vision and leadership abilities, and George McGovern needed [that] to strengthen the national ticket in 1972,” says Robert Schmuhl, a professor and chair of the Department of American Studies at the University of Notre Dame and a friend of Hesburgh.

McGovern, a senator from South Dakota, sought to lead the Democratic Party in the 1972 presidential election with his main platform promise of ending the U.S. involvement in the Vietnam War. He won the Democratic nomination, but his political campaign spiraled out of control when his initial running mate, Thomas Eagleton, dropped out of the race. Scrambling to find a viable replacement, McGovern desired someone Schmuhl describes as, “a rock solid person with impeccable credentials.” Hesburgh fit the bill, but turned down the offer.

McGovern would go on to lose the presidential election of 1972 by one of the biggest landslides in election history to Nixon, but unlike McGovern, Hesburgh’s influence in the political field was far from over. Hesburgh, a figure who worked to better the entire nation, not just a political party, never would have fit within the confines of a vice president.

“He worked with the presidents of either party — and for the good of the country,” Schmuhl says. “That’s something we, unfortunately, don’t see today.”

Hesburgh’s power was one of unity. He is fondly remembered as the man who united a group of bickering politicians over the common interest of fishing. He mended racial, gender and political divides. His own memorial brought together the vastly different minds of Democratic Senator Harris Wofford, former Republican Senator Alan Simpson, former President Jimmy Carter and President Barack Obama.

Though his acceptance as running mate for George McGovern would have been a valued asset to the ticket, Hesburgh felt his time was better spent serving all, not just a single political group. It speaks to the type of leader Hesburgh was that he was seriously considered to run for such an internationally powerful position.

Hesburgh told The Observer in 2013 that he hoped that people remember him first and foremost as a priest. His vocation led him to be a servant to God and others, and during his 97 years, he proved to be just that — a servant to politicians, presidents, the nation and his own Notre Dame students.