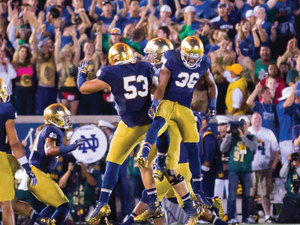 The 2014 Notre Dame football season was a roller coaster ride that kept fans on the edge of their seats from start to finish. There were plenty of highs and lows, twists, turns and bumps in the road, all leading to a dramatic finish that should give Irish fans something to smile about heading into the offseason.

Coming into the season having to replace both coordinators was a daunting task. Head Coach Brian Kelly returned to play calling on offense for the first time since 2011, while veteran Defensive Coordinator Brian VanGorder brought his attacking, takeaway-driven scheme to South Bend.

On the field, the Irish had as much talent as we’ve seen in Kelly’s five years at Notre Dame. Youth would be the defining characteristic of a team tasked with replacing five significant contributors lost to academic misconduct, as well as key veteran players across both the offensive and defensive lines who departed for the NFL or life after football.

The return of quarterback Everett Golson from a yearlong suspension brought expectations of improved production and some of the magic that we saw during the 2012 undefeated season. During the first seven games of the season these expectations were met, with Golson quickly playing his way into the Heisman Trophy conversation and leading the Irish all the way to a No. 5 national ranking.

Signature wins included a 31-0 drumming of rival Michigan in the teams’ last scheduled meeting, a game in which Notre Dame’s young defensive stars and new coordinator shined (and fist pumped). Against Stanford, senior tight end Ben Koyack came to the rescue with the go-ahead touchdown grab on fourth down with the game on the line. Add in wins over Rice, Purdue, Syracuse and North Carolina, and the team seemed prepared to face the biggest test of the season, a road matchup against the defending National Champions, the Florida State Seminoles.

In a battle of two undefeated teams, Notre Dame seemed in control for nearly the entire game. Emerging sophomore stars Tarean Folston, Corey Robinson and Will Fuller helped dictated the game behind a much improved offensive line, while senior linebacker Joe Schmidt led a defensive charge that rattled reigning Heisman Trophy winner Jameis Winston and put the ‘Noles in a hole early. A controversial offensive pass interference call in the game’s waning seconds, however, erased Notre Dame’s winning touchdown and instead handed the Irish their first loss of the season.

Many will point to that call as the moment when Notre Dame’s season took a decided turn. While the team countered the loss with a win over Navy, it came at a cost. Notre Dame lost Schmidt to a season-ending ankle injury during the contest. The former walk-on had become arguably the team’s most important defensive player, quarterbacking the young talent around him in a complex NFL-style scheme. The loss of Schmidt compounded with bothersome injuries to other integral players and a sudden turnover problem on offense led to Irish struggles down the stretch. The team lost four straight to end the season, including the first loss on senior day under Kelly. The regular season ended with a blowout loss to rival USC that saw a struggling Everett Golson benched in favor of sophomore Malik Zaire, leaving fans wondering which direction the team was heading.

At 7-5, Notre Dame accepted a bid to play LSU in the Music City Bowl, a matchup against the No. 1 defense in the vaunted SEC. Many questioned the team’s motivation heading into the game, but these players knew all about perseverance, a value embodied all season by Notre Dame graduate assistant and former Irish football captain Kyle McCarthy. McCarthy battled cancer for the majority of the season before ultimately getting a clean bill of health in November. He endured multiple surgeries and rounds of chemotherapy while never missing a day on the job. McCarthy’s grit and determination in the face of adversity was a daily inspiration for the young team, and they took that fight to the field in an impressive bowl win.

Kelly employed a two-quarterback system along with a run-heavy game plan that gave us a glimpse of the team we saw early in the season. The game’s storybook finish saw Golson called into duty on the final drive to lead the offense down into field goal range. Embattled senior kicker Kyle Brindza capped off his Notre Dame career by extending his own record for made field goals to 57 with the game winner in Nashville. The team’s play was encouraging for fans, especially the play of first time starter Zaire, who played himself into a quarterback competition that will be the focus of spring practices.

Kelly’s young team seemed to mature during bowl preparations, and will look to carry that momentum into the offseason. The season began with hopes for a return to national prominence. While the Irish missed out on the new College Football Playoff in its first year, the lessons learned and experience gained during the highs and lows of this season will be a valuable tool to draw on going forward and a source of motivation for a team that looks poised to take the next step in 2015. 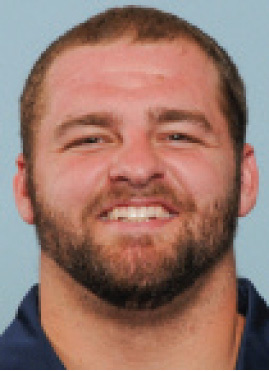 Mike Golic, Jr. started all 13 games as an offensive guard for the Irish during the 2012 season.