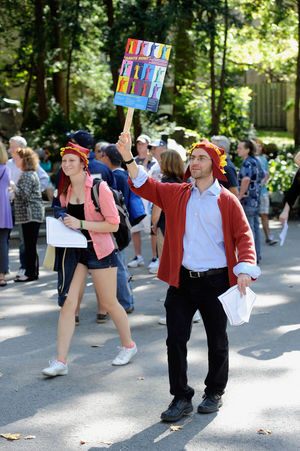 “It’s really an amazing experience to perform this poem all together as a community,” Anne Leone, associate director of Italian studies and research assistant professor, explained.

At the event, performers handed out flyers with the Italian text and English translation so that audience members could participate as well. “We want to introduce students and audience members to Italian culture by learning about and engaging with one of Italy’s most influential works of literature,” Leone said.

Around 2 p.m., groups of Italian students and faculty donned hand-sewn red hats and laurel crowns and began performing “Inferno I” and “Inferno V” at various locations around campus. Junior Chris Hickson performed “Inferno V” this year, but still vividly remembers “Inferno I” from last year: “[Dante’s] scared; it’s hell, he’s walking through and he’s finding all these monsters and creatures and he’s at the crossroads of his life.”

At the end of the performance, all of the groups converged at the Grotto to perform a prayer to the Virgin Mary spoken by St. Bernard in the final canto of “Paradiso.” After the performance, Italian Studies faculty and Dantists Leone, Theodore Cachey and Christian Moevs presented an illustrated public talk, “What’s Wrong With This Picture? How to Read Dante’s Hell” in the Carey Auditorium.

Sophomore Anthony Bell has studied Italian since high school and interned in Italy last summer. As a first-year performer in Dante Now!, Bell found wearing the red hats, getting to know his professor and classmates and performing together at the Grotto to be the most memorable parts. “It was a great experience,” Bell says. As for the future, he concludes: “[they] need more hats…Everyone needs a hat.”