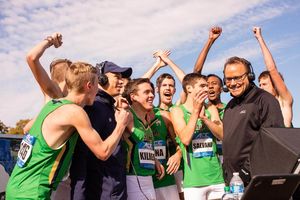 The Irish men had a relentless, unforgiving race in Chestnut Hill, Massachusetts, beating out Syracuse, the five-year reigning champions. Their resilience and commitment to their team truly paid off as they left everything on the table, proving their spirit and grit.

This title represents more than a good day for the runners, but “the culmination of years of our program’s culture changing for the better,” Coach Sean Carlson said. “They all knew they were running for something bigger than themselves. This year that shift has really clicked with everyone in our program. I couldn’t be more proud of the way our guys have bought in to the way we do things.”

Junior Kevin Salvano remarked, “This title is super significant for us because we’ve had our ups and downs since my freshman year, and we have finally been able to put it together this season.”

Each individual on the team counted during this race, and each runner made his mark on the course. Each made sacrifices for the greater good of the team. Salvano shares that “the result of this team aspect is friendships and memories that will last a lifetime.” This attitude is also what led to a successful victory.

It was a tight race; the top 50 runners were only three seconds apart within the first 1500 meters, including all 10 Irish runners. Each team member truly stood his ground and continued to prove his toughness throughout the race. Senior Tony Williams passed 27 competitors during his second mile. Sophomore Yared Nuguse and freshman Danny Kilrea were right

there with Williams through the 5,000-meter mark, finishing within one second of each other. Salvan and sophomore Andrew Alexander dug deep all the way through the end of the race as they made up the scoring team for the Irish men.

The women’s team also made a successful appearance at the race, finishing as a close runner up to North Carolina State by just over one point. The team has battled many injuries this season, but nonetheless showed unwavering effort throughout this race. Senior Anna Rohrer held a steady pace towards the front and was able to hold her ground throughout, finishing 3rd overall. Freshman Jacqueline Gaughan and senior Rachel DaDamio finished within the top 10. Despite the obstacles the women’s team has endured so far this season, their fortitude was proven.

While the team’s cohesive efforts brought about the victories, there were many notable individual races between the men’s and women’s teams. Each team had four members claim All- ACC Honors including Rohrer, DaDamio, Gaughan and Harris for the women, and Nuguse, Williams, Kilrea and Alexander for the men.

Moving forward, the team is now focused on qualifying for the 2018 NCAA Championships. The teams are divided into nine regions and in each region the top two teams automatically qualify for the national championships. Currently, the Irish men are ranked No. 2 in their region and the women are ranked No. 5. The culture and tenacity the teams have established will set them up for great success. Carlson expressed his optimism: “This is a significant moment for us because our program is rising to a new level with new expectations. We plan on continuing to follow our process to move up in the results and rankings over the next few weeks of this season and next few years.”