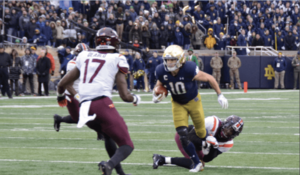 Chris Finke applied to Notre Dame with the intention of playing football. A walk-on that made an unlikely name for himself — he didn’t play until his sophomore year — Finke was given the chance to be a preferred walk-on after meeting a few coaches who at the time were visiting his high school because they were interested in another player. He arrived in the early summer before his freshman year to begin the training process.

Recalling a moment that helped shape him into the player that he is today, Finke discusses his time on the scout team with no scholarship during his freshman year. He had to get used to feeling like an afterthought for the coaching staff. Going from “the top of the totem pole to the very bottom” was something that Finke struggled with. It took perseverance and a willingness to step back when necessary that allowed Finke the ability to end his five-year collegiate football career on a high note, as a slot receiver with considerable targets.

The people who know Finke find that he is a person who makes sure to focus on relationships with the important people in his life.

“I’m really close with my family,” Finke stated with pride. “I would say that’s something not a lot of people know about me without getting to know me. Me and all of my siblings are really close. We’re close with our parents as well. They come to a lot of games. We visit each other a lot and they’re like my best friends.”

Finke models the characteristic humility that comes from starting off as a walk-on with no scholarship. His hardwork and determination led him to become one of the captains for the 2019-20 season.

“I felt really honored to know that my teammates and coaches viewed me as that kind of leader and just to know that I was part of the great group of guys that are captains right now and who have been captains beforehand,” Finke said. “Definitely just kind of a humbling experience realizing how the magnitude of what that role means and the responsibility that comes along with it.”

Before the Camping World Bowl, Finke reflected on the 2019 regular season.

“We came up short a couple times this season, which is always disappointing,” Finke said. “Ultimately our goal is to win a national championship, but nothing we can do about that now besides beat the opponent that’s in front of us. So, me personally, this will be my last time ever playing for Notre Dame, so that’s kind of what’s in the back of my mind motivating me and trying to get the guys motivated as well to play this game.”