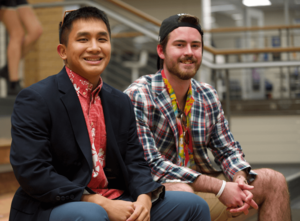 When Zahm freshmen Carlston Chang and Kevin O’Leary strolled into the Scholastic office wearing Zahm gear, shorts and Hawaiian shirts approximately one hour before the university shut down due to inclement weather, an interesting interview was all but guaranteed.

“People might see us as a ticket for Zahm, but it’s definitely more than just that,” Chang said. “There are a lot of things in the university that could be improved, and we want to look at some of the things that they’ve maybe neglected or just haven’t been bold enough to consider changing,” O’Leary added.

Just which aspects of the Notre Dame community does the Zahm ticket wish to change? “We have a lot of lofty goals,” O’Leary said. Pointing out the contentious nature of the debate over the Columbus murals in the Main Building, O’Leary advocated for “compromise.” He suggested that, rather than “completely removing” the murals, the administration “replace them with a selection of tasteful selfies of Fr. Jenkins. One suggested title: “the Dankins Mural Collection.”

Chang and O’Leary also offer a fresh new approach to an issue that countless student government candidates have faced: gaining real-time access to student opinions. They want to crowdsource student ideas using Google Forms, which they stated they have already taken advantage of to generate ideas for the interview. Chang cited this system as one of his favorite parts of the platform.

O’Leary, on the other hand, emphasized a different favorite platform feature: in keeping with Notre Dame’s tradition as a “big basketball school,” the addition of Los Angeles Lakers forward LeBron James to Notre Dame’s struggling roster. Throughout the course of the interview, O’Leary and Chang listed several other innovative ideas, some more feasible than others — numbered dining hall tables, “trial-by-combat” Office of Community Standards hearings and Times Square-style billboards running commercials featuring Rev. Pete McCormick, C.S.C. on the Hesburgh Library. Touchdown Jesus, of course, would be left intact — “Untouched-down Jesus” — under the new regime.

O’Leary and Chang, despite their interest in a range of topics, came equipped to handle serious issues. Chang spoke to the diversity in this year’s set of tickets, stating that he appreciates the differences in racial background among his competitors. But, according to Chang, the Zahm ticket wants to take diversity where it’s never been before. “We could diversify our pool of waterborne illnesses on campus by putting salmonella in our drinking fountains so that the E. coligerms on campus are not lonely anymore,” he said.

The Zahm ticket also came prepared to tackle transparency, but not in the way voters might expect. “Our biggest issue with transparency is the transparency of our toilet paper,” said Chang. Citing the “emotional pain, physical pain” caused by the thinly-woven toilet paper often relegated to campus bathrooms, O’Leary made an appeal to Catholic social teaching and basic human dignity: “We gotta fix it.”

Though society is rife with political divisiveness, Chang and O’Leary aim to dismantle the divisions so ingrained in the American political arena. “There’s been a lot of talk about walls in the political sphere of our country,” O’Leary said. “We believe in decorating walls, not building them.” He added, “We also tear down walls, but we’ll get to that later.” As Chang put it, the Zahm ticket hopes to inject “the aloha spirit” into the Notre Dame community, fostering a spirit of welcome for all.

Both freshmen bring unique experience to their campaign. Chang served as class president in high school (interestingly, he pointed out, the same Hawaiian high school attended by Barack Obama and Manti Te’o). O’Leary also cited high school leadership roles among his qualifications, listing his ability to listen as one of his strong suits: “You can’t lead if you can’t listen.”

The ticket places a high emphasis on its ability to listen to the concerns of the student body. Chang, however, posited that the candidates’ “innocence” is the factor that truly makes them the ideal ticket. “We don’t really hate the administration like I’m sure some people might,” he said. “So we’re together with them, and we’re together with our constituents to build a better Notre Dame.”

Both Chang and O’Leary spoke to their love of the Notre Dame community. As Chang put it, “Wherever you are in the world, you can just take Notre Dame with you.”

What about Chang and O’Leary’s opinions on current affairs beyond the Notre Dame bubble? According to O’Leary, the “despicable lack of Hyperloops in the world” constitutes a serious problem. Chang, meanwhile, hopes to “get rid of the permacloud.”

Only time will tell if the lofty goals of these idealistic freshmen can come to fruition. For now, though, the Zahm ticket prescribes only this concise advice to prospective voters: “Vote.”