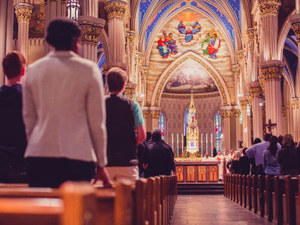 A prayer service honoring the legacy of Dr. Martin Luther King, Jr. was held on Monday, Jan. 19 in the rotunda of Main Building under a large banner bearing the iconic photo of Father Hesburgh, arm in arm with Dr. King.

The service was followed by a mass to honor Dr. King in the Basilica of the Sacred Heart later that afternoon. The mass was presided over by Fr. Pete McCormick, C.S.C., and featured music by the Voices of Faith Gospel Choir.

Fr. John I. Jenkins, C.S.C., spoke at the service, addressing the relevance of the holiday in light of “tragic events in Missouri and France.”

“In these and other events a certain cycle of violence is at work, all leading to deeper divisions,” Jenkins said.  “The special greatness of Martin Luther King, Jr. is that while doing all these things, he showed us a way out of that destructive cycle. He showed us that we didn’t have to respond to hatred with hatred, to violence with violence.”

A crowd of students, faculty and community members paid rapt attention to hymns, scripture readings and a passage from Dr. King’s “The Drum Major Instinct” speech.

During the service, Notre Dame’s connections to the Civil Rights Movement were made obvious. The famous photo of Father Hesburgh and Dr. King was taken when the two sang, “We Shall Overcome” at Soldier Field in Chicago in 1964. This moment in history was echoed as the Celebration and Folk Choirs opened the service singing the same song.

“Their courage calls us to be courageous. Their sacrifice calls us to self-sacrifice,” Jenkins said of members of the Civil Rights Movement. He noted that their actions should evoke a “prodding of our consciences.”

“Let us not forget, let us continue to remember. Let his message change our hearts. Let us ask today how we can follow his example, not only on Jan. 19 but on every day of our lives,” he said.

The closing hymn offered a simple petition that echoed Fr. Jenkins’ imploration: “Let There Be Peace on Earth” — from remembrance, growth.