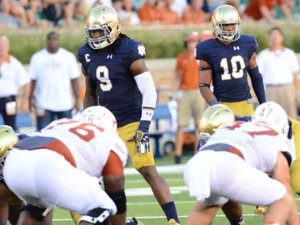 The words “college football” bring to mind several stirring images.  Images of young men laying it all on the line, fighting for pride and for championships, banding together with their teammates in pursuit of something bigger than themselves.

But the true action of college football does not occur on the playing field.  The real activity occurs in the financials, where major programs, regardless of their student-athletes’ performances, go home as winners.

In 1984, the Supreme Court decision in NCAA v. Board of Regents of the University of Oklahoma dissolved the NCAA regulation over college football that had prevented athletic programs from signing their own television contracts. Along with the lucrative television deals came elite football programs charging a premium for season tickets. From there, sponsorships and advertisements added to the rapidly growing empire of college football.

Gil Gaul, two-time Pulitzer Prize-winning journalist, writes of the economy of college football in his recently published book Billion-Dollar Ball.  He discusses how the big business of football came to be, its present state and where it could be going.

“It’s been a phenomenal economy,” Gaul says. “The corporate money from [apparel] deals, the licensing fees, corporate advertising… all of these have scaled up dramatically by 200-300 percent.”

Despite the increasing success in recent decades of many elite college football programs, Notre Dame included, the future of football is far from secure.

“The real fear for athletic directors now is the disruptive force of technology,” says Gaul. “We’ve got a lot of distractions, looking at apps and checking social media. We are not engaged in the games the way older fans are.”

Getting and keeping the attention of fans, specifically student fans, is a problem that Notre Dame, despite its status as a historical power, is concerned about. According to CBSSports.com, nationally, college football home attendance in 2014 was the lowest it has been in 14 years, posing a threat to an industry that relies on fan loyalty.

Notre Dame was among the few schools exempt from a drop in attendance. It reported zero change in attendance from 2013 to 2014.

“Technology will allow you to do lots of other things besides football, and that is the threat to football,” Gaul says. “Why sit at a game for three hours when you could be out doing other things? How are we going to keep this kind of loyalty to keep this economic engine humming?”

College football isn’t child’s play; it’s a corporate entity, and like all companies, it’s faced with adapting to a tech-savvy society.

Gaul noted that some of the top football programs have improved Wi-Fi and have added jazzy digital scoreboards to attract straying audiences.

Notre Dame has sought a similar solution with the Campus Crossroads project.

The project, among its other plans, intends to “improve the experience of every fan who attends our games,” according to a press release from Aug. 25.  New, wider bench seating will be installed; concession stands and restrooms will be renovated; and—flashiest of all—a video board will be added to the top of the stadium.

But even without Campus Crossroads, Notre Dame’s passionately loyal fan base may be enough to keep attendance high.

“Notre Dame is such a unique brand and has such a strong following, so it might be immune,” Gaul says.

The packed stadium for the Sept. 5th game against the University of Texas Longhorns seems to attest to Notre Dame’s immunity. At least for these two cash cows in college football, this season is business as usual.