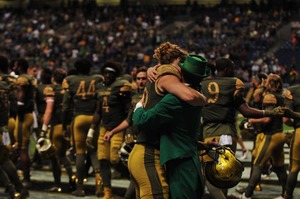 Once a year Notre Dame takes over a city.

Since its inception in 2009, Notre Dame has gone 7-0 in these games. This year, the Fighting Irish chose to come back to San Antonio, the site of the 2009 Shamrock Series, on the weekend of November 12, coinciding with Veteran’s Day. Not only was this the first time that the Shamrock Series has repeated a location, but it’s also the first time with a repeated opponent.

The Irish took on Army in the Alamodome, deep in the heart of Texas. Notre Dame has gone 14-0 against Army in their recent encounters, and the last time that the Irish lost to both Army and Navy in the same season was in 1944.

The day kicked off with an early morning 5k race through the city. The band then stepped off from the San Fernando Cathredral and marched through closed streets all the way to the stadium.

After losing the coin toss, wide receiver CJ Sanders received the opening kickoff and ran the entire length of the field to return the ball for the first Irish touchdown. Kicker Justin Yoon scored the extra point, giving the Irish an immediate 7-0 lead.

At the 10 minute mark in the first quarter, Notre Dame quarterback DeShone Kizer threw a 37 yard touchdown pass, and once again Yoon came through on the extra point. After one more touchdown, the Irish ended the first quarter with a 21-0 lead.

Player of the Game: Durham Smythe

Army came back out in the second quarter energized and ready to go. Less than a minute in, Army retaliated when Paul Walker scored a touchdown, but the extra point was no good, bringing the total to 21-6. Notre Dame wouldn’t take that lying down, however, and pushed back to score a touchdown at the 9:30 mark, bringing the score back up to 28-6. Finally, right before the half, Kizer threw a 31-yard touchdown pass to raise the score to 38-6, which it would remain through the half.

During halftime, the Notre Dame Marching Band gave a performance centered on the branches of the military, playing the songs for each individually. They also played Deep in the Heart of Texas and, as usual, closed with the Notre Dame Victory March.

The second half marked a strong performance by the Irish, so strong that they were able to prevent Army from scoring even a single point more. As the fourth quarter came to a close,the scoreboard read 44-6 and the Fighting Irish had won.

While the game itself was the highlight of the weekend, one of the most anticipated events was the presentation of the Shamrock Series uniforms. Every year, Notre Dame comes up with a new uniform design, usually with some nod to the other team incorporated. This year, since the team played Army the day after Veterans’ day, there were clear references to the military present in the uniform. This year’s design featured Army green shirts with an American Flag patch on the back of the neck. They also featured the “God, Country, Notre Dame” image from the Basilica on the shoulder.

Next year, the Irish will not be traveling for any home games, as the Shamrock Series will be put on hold for at least a year. Instead, there will be seven true home games in 2017 in order to fully utilize the newly refurbished stadium. Luckily, a 44-6 win is a great way to put a tradition on pause.