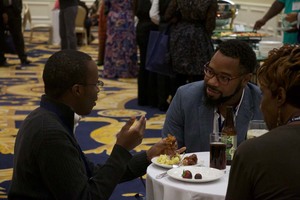 On October 9th, the Indiana Association of Blacks in Higher Education kicked off its Annual Fall Symposium with an opening event in the Morris Inn Ballroom. This year was the first time Notre Dame hosted the two-day conference.

Eric Love, director of Staff Diversity and Inclusion at Notre Dame and director of the planning committee for the association’s 2016 Fall Symposium, was especially thrilled to host this year’s conference at Notre Dame. The conference attracts new talent to the school while also serving as a retention tool for the African American employees at the university.

“I am excited to reconnect with old colleagues from institutions all over the state,” Love says. “I really want to be reenergized and reinvigorated in working on the issues of diversity and inclusion.”

The theme of the symposium was “Policy, Progress, Practice: The Education Pipeline.”

“The education pipeline is still a challenge with respect to African American students entering post-secondary education. There is a lack of diversity on college campuses,” says Dr. Odelet Nance, assistant dean of instruction at Vincennes University.

In addition to presentations titled “Career Advancement Tips for People of Color” and “Underrepresented Faculty in the Academy,” the Symposium offered a professional development workshop for staff. The workshop was led by Dr. Terrell Strayhorn, director of the Center for Higher Education Enterprise at Ohio State University.

“One of the things that I think is integral is for underrepresented students to have a sense of belonging,” says Iris Outlaw, director of Multicultural Student Programs and Services. “That is a lot of the research that Dr. Terrell Strayhorn has been doing. He talks about the importance of ethnic organizations on college campuses and resources — not only for African American students, but also LGBTQ and other marginalized groups.”

Dr. Mary Howard-Hamilton, a professor in educational leadership at Indiana State University, says that IABHE hopes to be visible in the community and heard in the state legislature.

“We want to be an educational, political force for black voices in higher education,” she says.