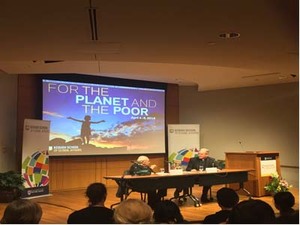 From April 4 to April 6, Notre Dame played host to a conference entitled “A Global Compact for Sustainable Development: Advancing Care for Our Common Home.” The conference, which was the joint endeavor of the Mendoza College of Business’ Center for Ethics and Religious Values in Business and the United Nations Global Compact, delved into the practical realities of Pope Francis’ recent environmentally focused encyclical. It featured a series of panels by experts in various fields, including sustainable development, economics, global health, ecology, theology and education.

Laudato Si’, the papal encyclical by which the conference was inspired, was issued in May of 2015 by Pope Francis. It focuses on the environment, as well as sustainable development, and lists a series of sustainable development goals (“SDGs”) that were unanimously approved by all countries of the United Nations in September of 2015.

Fr. Oliver Williams, C.S.C., is the Director of the Center for Ethics and Religious Values and was the main orchestrator of the conference.

“This… conference (has brought) together some of the world’s leading experts in the area of sustainability and global development to present topics considered of critical importance to advancing the SDGs and the vision of the papal encyclical,” Williams says.

“The purpose of the conference is to educate students about the role of business in overcoming world poverty, to attract more companies to participate in advancing the SDGs, and to demonstrate how the papal encyclical… and the SDGs share a common mission.”

The conference began on Monday, April 4 and continued until Wednesday, April 6. It featured a series of lectures from various visiting figures, as well as Notre Dame faculty members. After a welcome from Rev. John Jenkins, C.S.C., on Monday, the lectures began the following day. Tuesday’s talks all fell under that day’s overarching theme, “Laudato Si’ and the Sustainable Development Goals.” Wednesday’s theme was “Partnerships for the Planet and the Poor.”

“All of us want to leave the world better than we found it,” Williams says. “This conference will help us as businesses, organizations and as individuals [to] shape a world better for ourselves [and] our families, as well as for the least advantaged.”

On Tuesday, April 5, Rev. Gustavo Gutiérrez, O.P., spoke in the Hesburgh Center for International Studies. Rev. Gutiérrez, referred to by moderator Rev. Daniel G. Groody as the “father of Liberation Theology,” is the John Cardinal O’Hara Professor of Theology at Notre Dame. During his panel, Gutiérrez described Liberation Theology as a “Catholic movement of lay persons to see, to judge, to act,” and “above all, 90%, the preferential option for the poor.”

“Preferential means something is first as priority,” Gutiérrez says, “In this case, preference is to say first is the poor...  It’s clear they’re the first, the more fragile person.”

The method of Liberation Theology, according to Gutiérrez, is to start with “the first question, reality, then questions about this reality.”

“The question to start from is the least,” he says. “Poverty is not only economic. The poor are insignificant persons, the non-persons. No one is insignificant – except in our society.”

“The economic question is very important, but someone can be insignificant for several reasons,” Gutiérrez says, noting that one large factor determining insignificance is “the color of the skin.”

In order to use Liberation Theology to enact the preferential option for the poor, Gutiérrez advised audience members to look to the Gospels.

“Poverty is so present in the Bible,” he says, encouraging listeners to “consider the situation in Latin America in light of Biblical poverty.”

“The love of God and the love of the neighbor,” he says, “is impossible to separate. We can’t say, ‘I love God and not my neighbor’ – it’s not possible. This is the root from which to speak of this vision.”

“Option is a decision,” Gutiérrez says. “It’s the option to love.”