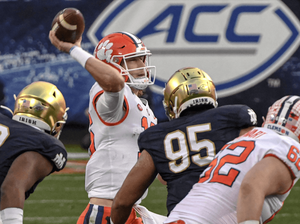 (The views of this author are not necessarily the views of Scholastic magazine.)

Notre Dame football has a long, proud history. The Fighting Irish are a national brand, attracting fans from all corners of both the United States and the globe. They regularly sell out Notre Dame Stadium, and often contend for major bowls and national championships. What’s also impressive about all this is that Notre Dame is the only significant football program to do this without joining a conference of other collegiate teams.

Many people believe that Notre Dame avoids joining a conference only because they make money off of lucrative television contracts with NBC. While the University does bring in significant revenue from these deals, this is missing the bigger picture. Notre Dame can cultivate its national status by staying out of conferences. Other programs are often bound to regional fanbases, due to their conference opponents all being within a relatively similar geographic area. Notre Dame’s freedom from conference loyalty allows for games around the country. This means that the Irish can market to fans nationwide, and perhaps more importantly, pursue football recruits that they otherwise wouldn’t find.

If there were any constants in the college football world before the pandemic, one of them was Notre Dame’s bachelor status. However, the pandemic of this past year has shown that constants do not exist. Once the NCAA canceled winter and spring sports, all eyes turned to football. A few conferences opted out of the season initially, but the ACC didn’t. Luckily, Notre Dame and the ACC have a relationship, despite Notre Dame maintaining a healthy distance from the conference. In 2013, they agreed to a deal which stipulated Notre Dame play five ACC opponents per year, but still kept the University formally free from the conference.

With the season on the line, Notre Dame and the ACC turned to each other. Notre Dame desperately needed opponents, and the ACC desperately needed teams to play each other. The union made sense. The University of Notre Dame has more in common with ACC schools than schools from the Big Ten, which is considered to be a better geographic fit for Notre Dame. Besides making sense, the union made headlines. Fans and doubters finally would have an answer to their perennial question. Could Notre Dame football survive in a conference?

Well, the answer was a resounding “Yes.” After a slow start against Duke, due more to an uneven practice schedule and first-game rustiness than the quality of the Duke team, the Fighting Irish were up and running. The only true misstep of the regular season was a scary game against Louisville, though the Irish still came out on top 12-7. The challenge, though, lay in the latter half of the season, with Clemson and North Carolina looming on the schedule.

These games were the true test for Notre Dame football. Is the program worthy of contending for a National Championship while remaining outside conference play, or is it overrated? That question was answered in the instant classic thriller on Nov. 7, when Notre Dame defeated Clemson in double overtime.

The Irish proved it wasn’t a fluke when they handily beat a North Carolina team considered to have one of the best offenses in the nation. Maintaining an unbeaten record through a tough conference schedule is no easy feat, especially in the midst of a pandemic with constantly shifting personnel and scheduling, but Notre Dame did it. The players were rewarded with a College Football Playoff berth, even though it ended in a loss.

After the season, one question about Notre Dame and the ACC remained. Will Notre Dame stay a full member of the ACC?

The answer seems to be “no.” While conference play has its benefits, Notre Dame was doing just fine on its own.