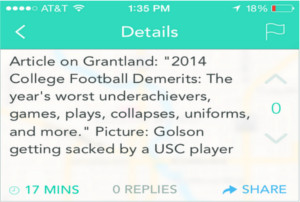 Yik Yak is a social media app that allows users to anonymously post or “yak” their thoughts, while also providing the ability to  up or down vote other’s yaks. For Notre Dame students, Yik Yak acts as a news source, a place for campus gossip and a chance to confess their true feelings on any topic—dorm pride/hate, gender relations, sports teams—without having to worry about any of their yaks being traced back to them.

Then Oct. 18 rolled around, a day remembered as one of tragedy and injustice. With 16 seconds to go in the fourth quarter 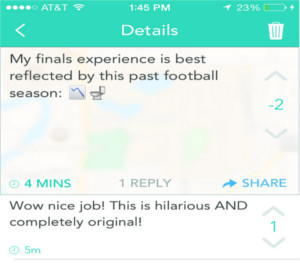 of a game against Florida State, Notre Dame scored what would have been a game winning touchdown until the referee called offensive pass interference. After the first loss of the season, it might be an understatement to say that Notre Dame fans were crushed. Yet the yaks trash-talking the next rival, Arizona State, continued to pour in.

However, as the season progressed and the losses accumulated against opponents such as ASU, Northwestern and Louisville, Notre Dame fans’ yaks took on a despairing tone. By the time the final game of the season rolled around against USC, Yik Yak declared what all Notre Dame students were afraid to confess out loud: there was a strong possibility Notre Dame would lose and it would be ugly.

Initially, it was thought that this season might rival the 2012 12-0 season, but it took a disappointing turn for the worse. The season is not over yet,  as Notre Dame has found its way into the Music City Bowl against LSU, but Notre Dame yakkers seem to have abandoned their team.

Now, the only mentions of the Fighting Irish football team usually come as the butt of a joke. As for other athletic teams, basketball and hockey have managed to squeeze their way into the Yik Yak newsfeed, but their popularity does not come close to rivaling the amount of yaks that used to surround the football team. 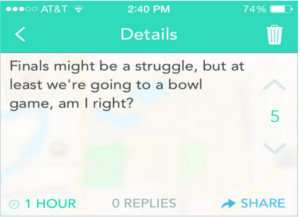 Of course when asked, Notre Dame students will proudly defend their team, but they do it hiding behind the safety of

Though this season may have been a disappointment to all those who bleed blue and gold, Yik Yak proved that the biggest let down came from Notre Dame’s faithless yakkers, not from the football team.